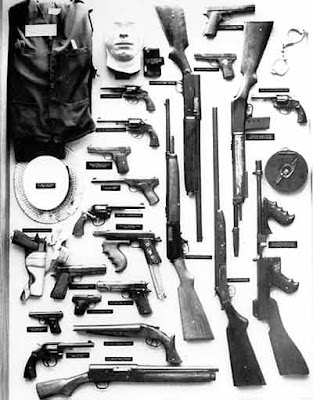 (The picture is supposedly some of the hardware owned and carried by John Dillinger over his career. That's his death mask in the upper left corner and -- I think -- the jacket he was wearing when gunned down.)
Recently, I went to get my Oregon CHL renewed. I have had one in Oregon for like nineteen years, along with one in Washington. I travel a lot back and forth twixt the two, and for some odd reason, they don't seem to offer reciprocity with these things. Odd, because both of their CHL's are recognized in twelve or fifteen other states.
Ah, well. Bureaucracy.
Being an upstanding citizen, never arrested, not more than two beers if I'm driving, I can, with my CHL, carry boomware concealed upon my person in these states, excepting such places like courtrooms and post offices and airports and like that. I am a legally armed citizen.
Some changes over the years in the process. The law was passed as part of a deal with the NRA and state gun groups for a waiting period on gun purchases. Most liberal woman in the House set it up, which shows how strange bedfellows get.
Local sheriffs were the issuers, and they weren't prepared for it. People wandered in, produced documentation showing competence with a handgun, filled out some papers. They got fingerprinted with perp-ink, paid for an FBI check, and in a few weeks, the license arrived.
Now, they have their own office in the courthouse, appointments are necessary, and there are electronic signature and fingerprint readers to speed up the process. And pretty soon, proof of citizenship is going to be required, i.e. a birth certificate or passport to go along with your DL, if it was issued before 2008. (After 2008, you don't need that because you had to have a birth certificate or passport to get an Oregon Driver's License.)
There are thousand of folks with CHLs in Oregon, more in Washington, and relative few of them have been rescinded for misuse of the firearms.
Posted by Steve Perry at 9:25 PM

I received mine about a month ago, after waiting for 6 months. Had to redo my photos, the first set were 'pixelated'.

I see Oregon doesn't honor mine nor does Texas honor your's.

Bummer. Be nice to see one day where it doesn't matter which State issued it, it's honored in all states.