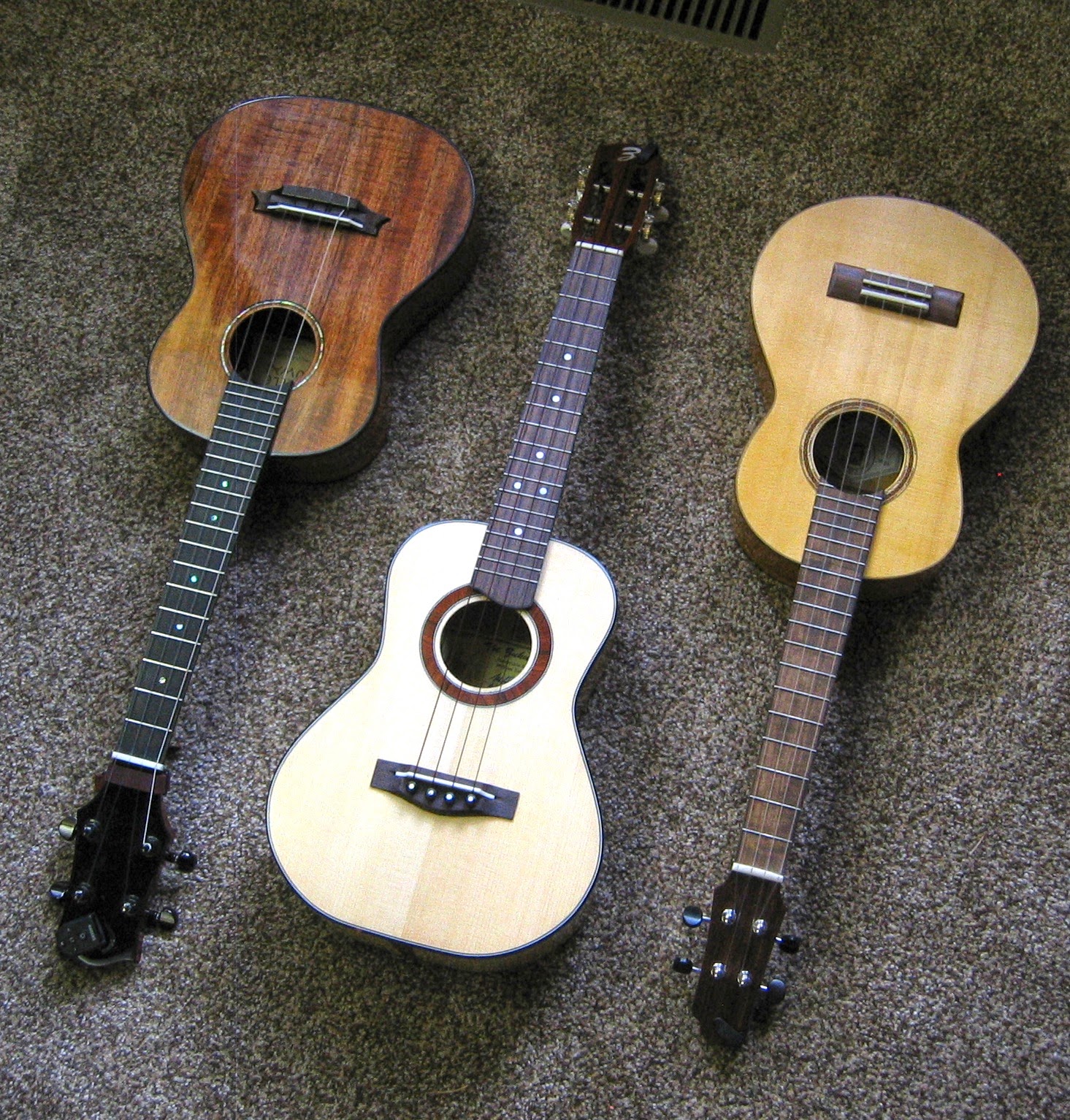 I am pleased and privileged to own three handmade ukuleles, from luthiers with high-level skill and artistry. Two of them were made for other folks and I bought them, one used, one because the sale fell through. The third was custom-built with my input. The luthers are, in order of acquisition: Woodley White, Alan Carruth, and Michael Zuch. 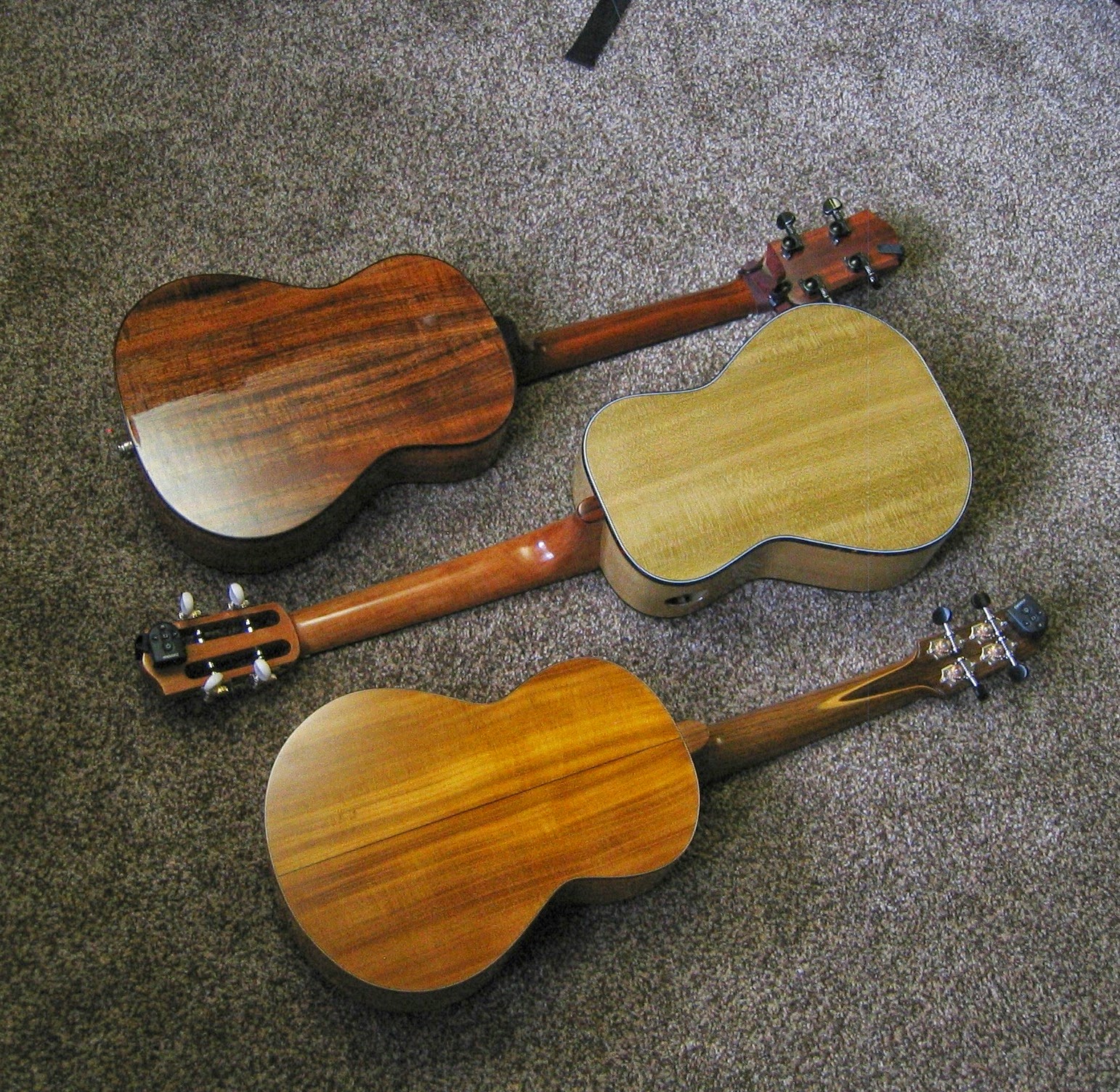 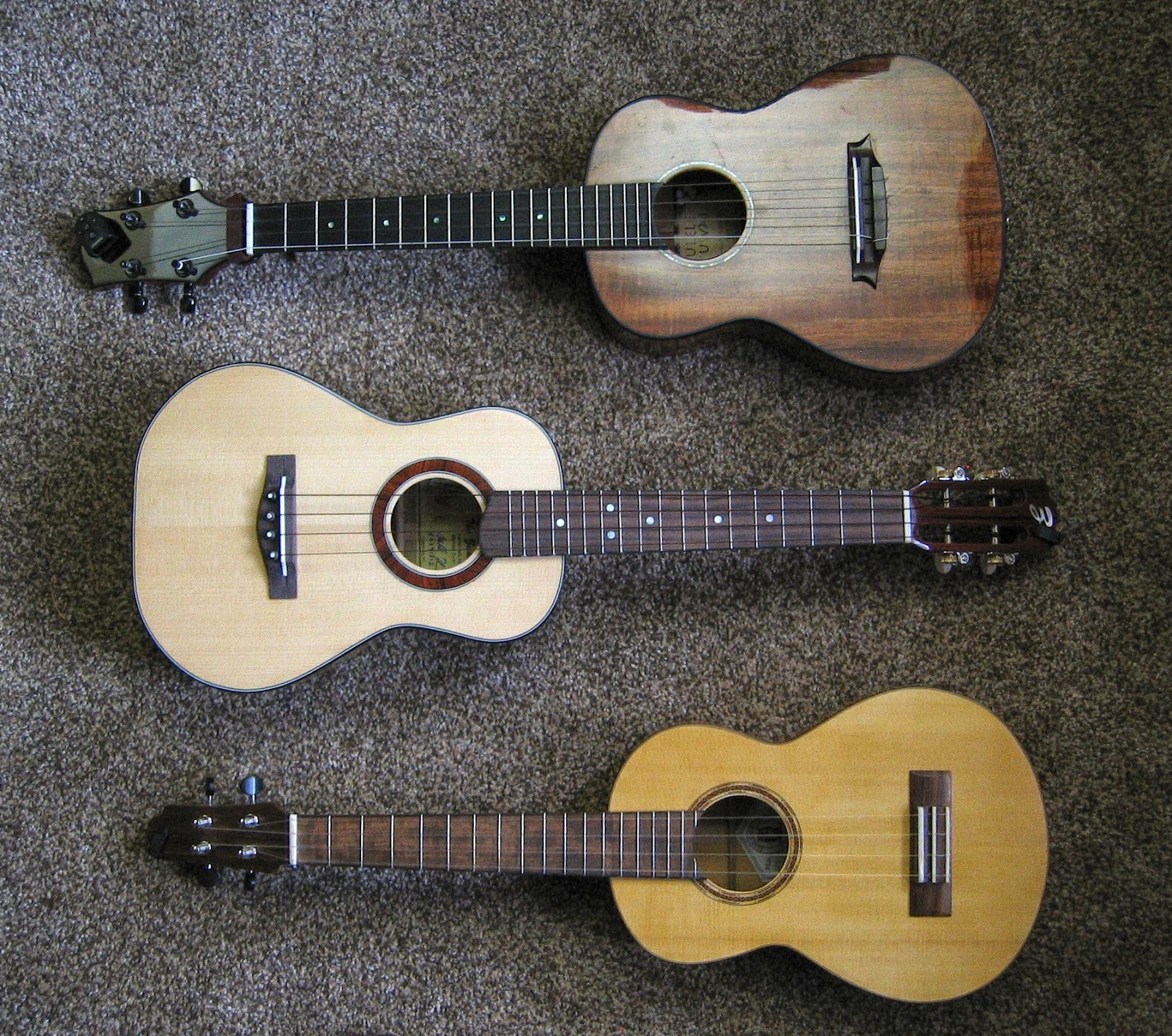 
They are all, insofar I can tell, outstanding instruments. All tenors. All strung low-G. Quality woods and tuners, and they all sound different, but great, to my ears.

As you can see in the photos, all of of them are made with minimal bling; by that, I mean little in the way of decorative inlay. They are all bound and purfled. The White has an abalone shell rosette and a stylized heart inset into the headstock, with small abalone fret marker dots. The Zuch has a solid wood rosette and a script-Z inlaid into the slotted headstock, along with MOP fret dots. The Carruth has a classical-guitar style rosette, but no other inlay, not even fret markers.

With the White and Carruth, that’s how they came, and I allowed when talking to Michael Zuch that plain was fine with me: Inlay and custom decoration add to the cost of an instrument, because they take a lot of time and effort from the builder.

One of them now lives at my daughter’s, and I play the other two about equally. They are way better gear than I am a player.

When I started talking to Beau Hannam about another instrument, I didn’t intend to have any more bling on it than on the others. I did want it to have a couple of accents, one of which was snakewood, and Beau allowed as how this wasn’t a problem.

Pretty much I told him the same thing I told Michael: Build something you like; that if somebody asked you to hold up a uke that represented your best? Make that.

As the build went on, Beau would ask, when he came to different places, if I wanted to add something. Sound port?

Wasn’t in my original plan, but Michael had also asked about this on his build, and I liked the results, so that seemed okay to me.

How about some bits of snakewood in that Michi-style rosette? And to bind the sound hole? 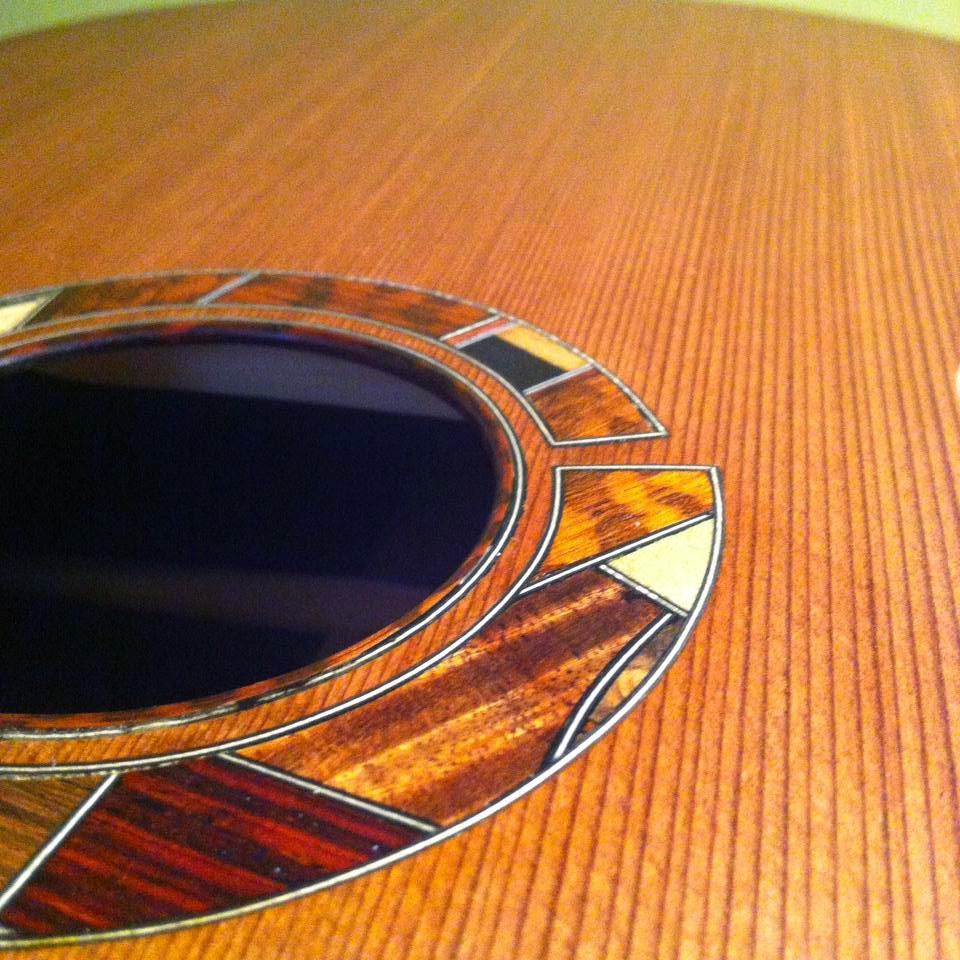 You’re a science fiction and fantasy writer. How about some elements that might bring that out? I have some agate that kind of looks like the surface of Jupiter I could put in the headstock, does that sound interesting?

It does. Go right ahead. 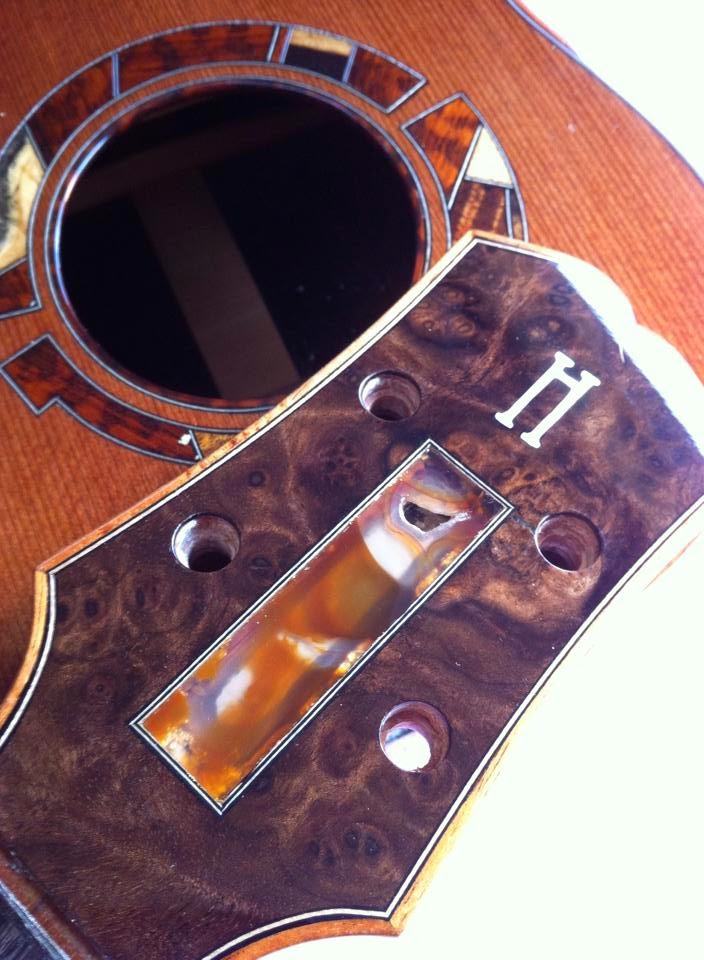 Hey, I’ve got some walnut burl, want to see that on the headstock? 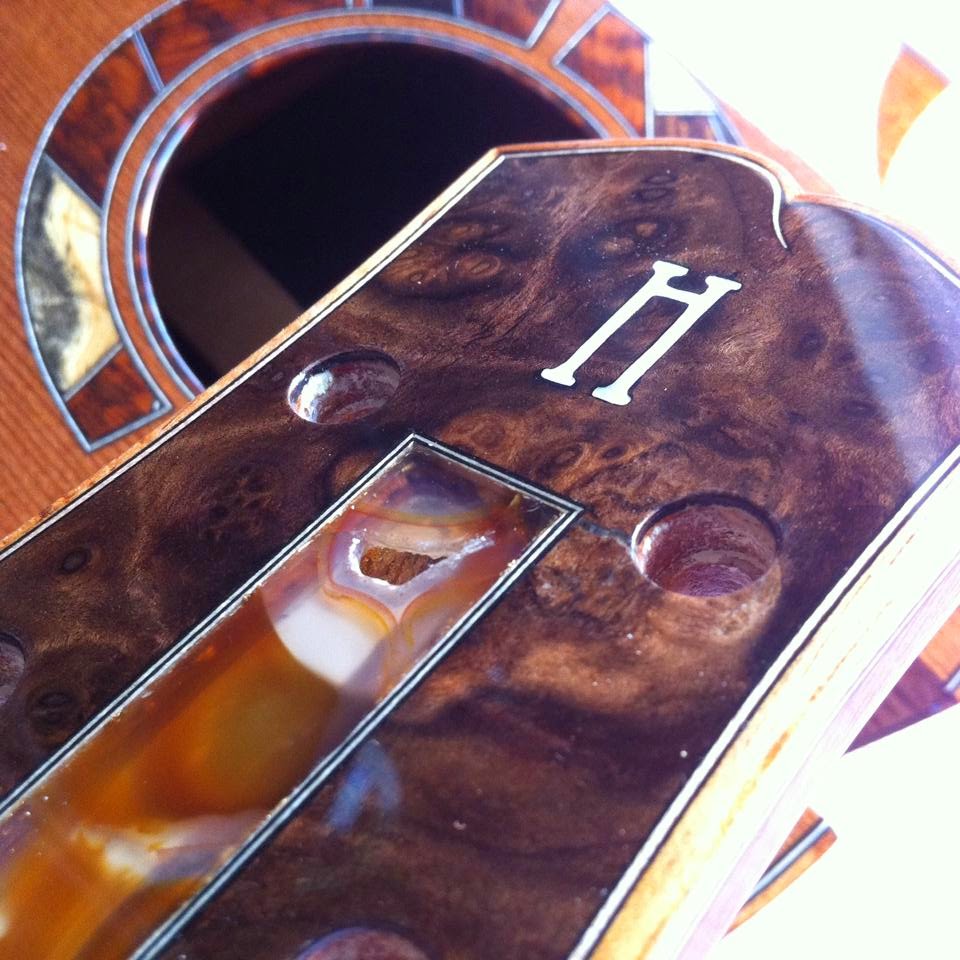 On the butt, around the pick-up jack, more snakewood? 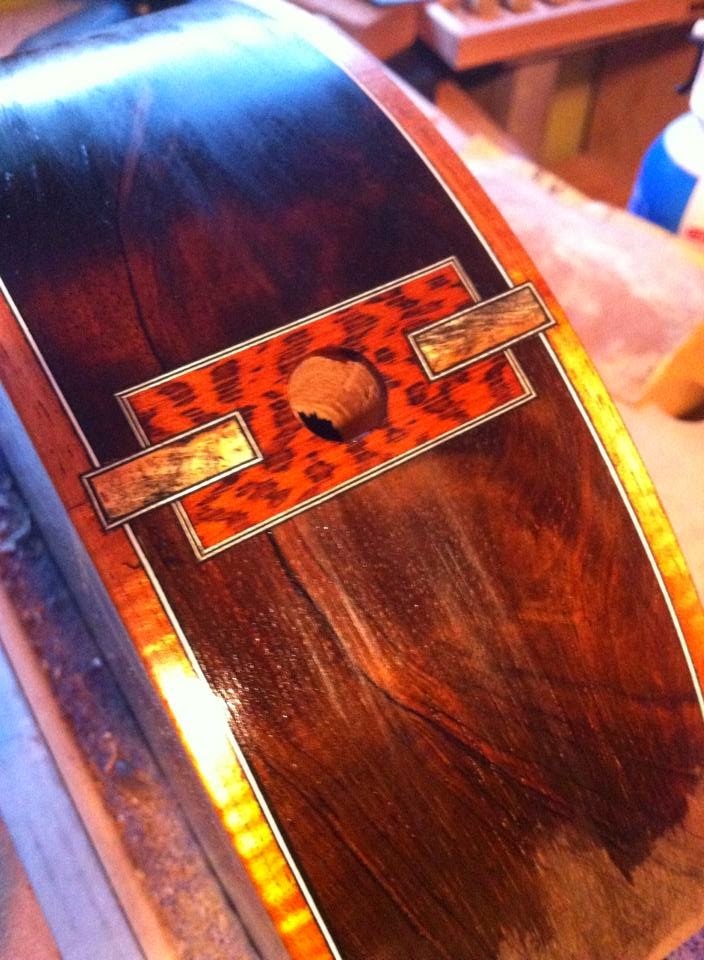 The heel cap? Got some more snakewood. 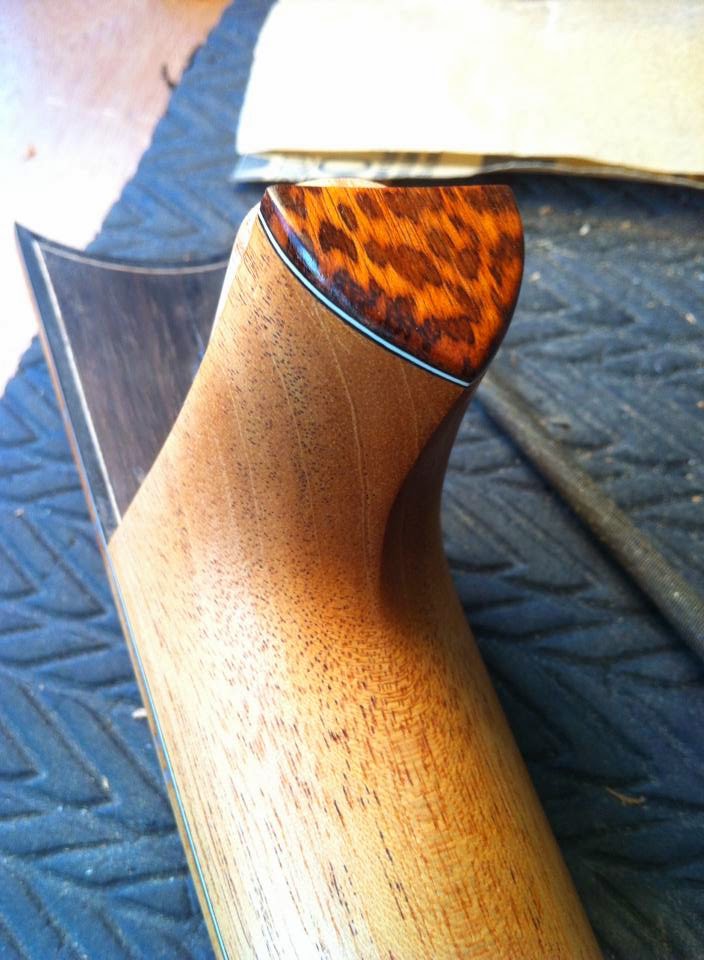 Tuners? Here are some choices. And you know, with the high-end Robson’s, you can get those with snakewood buttons.

Then we should certainly do that. 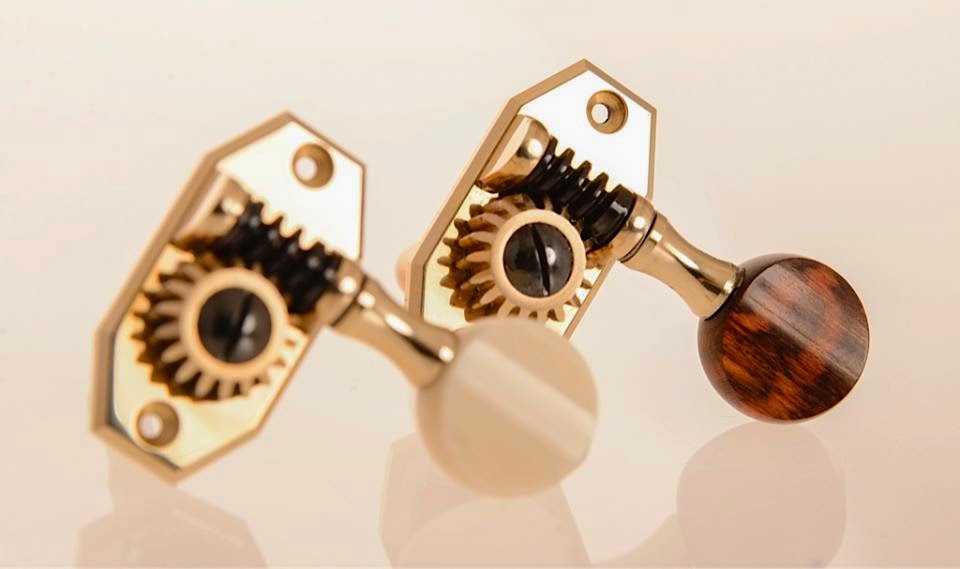 Now, about the fret markers, I have some Tahitian Black MOP we can use next to some snakewood … 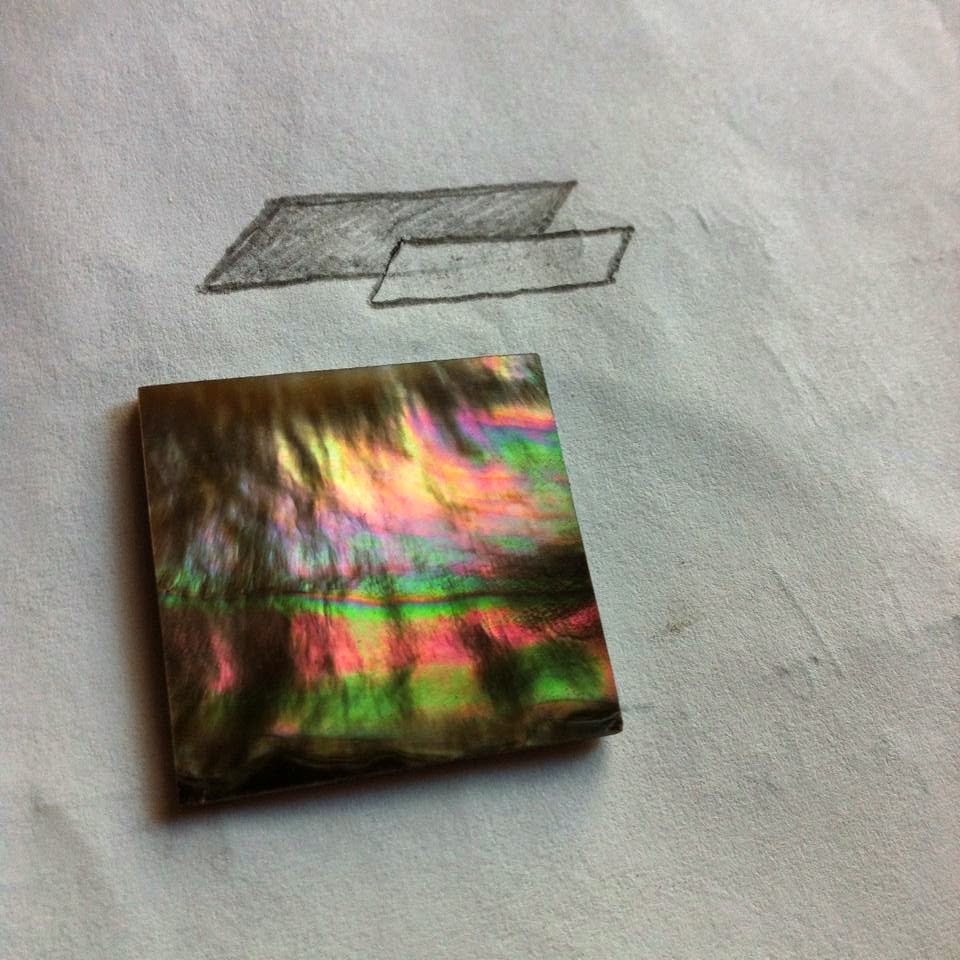 So what we have is a nearly-complete instrument that, from the photos I have seen, is absolutely gorgeous, and with more accoutrements than I had considered when we got started. With any luck, I'll have my hands on it in a few weeks. 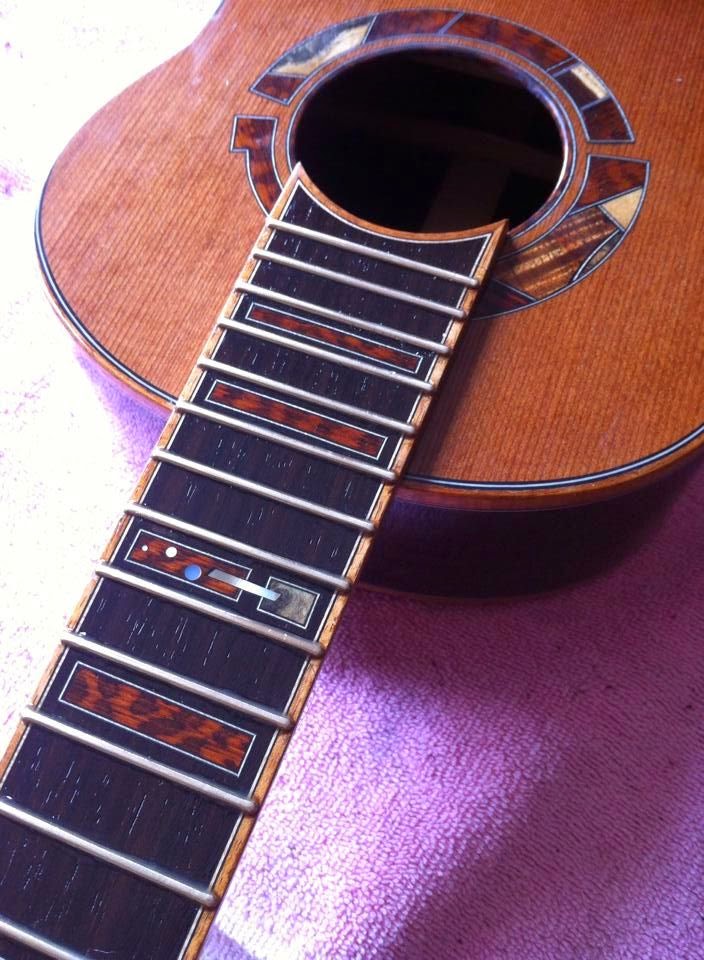 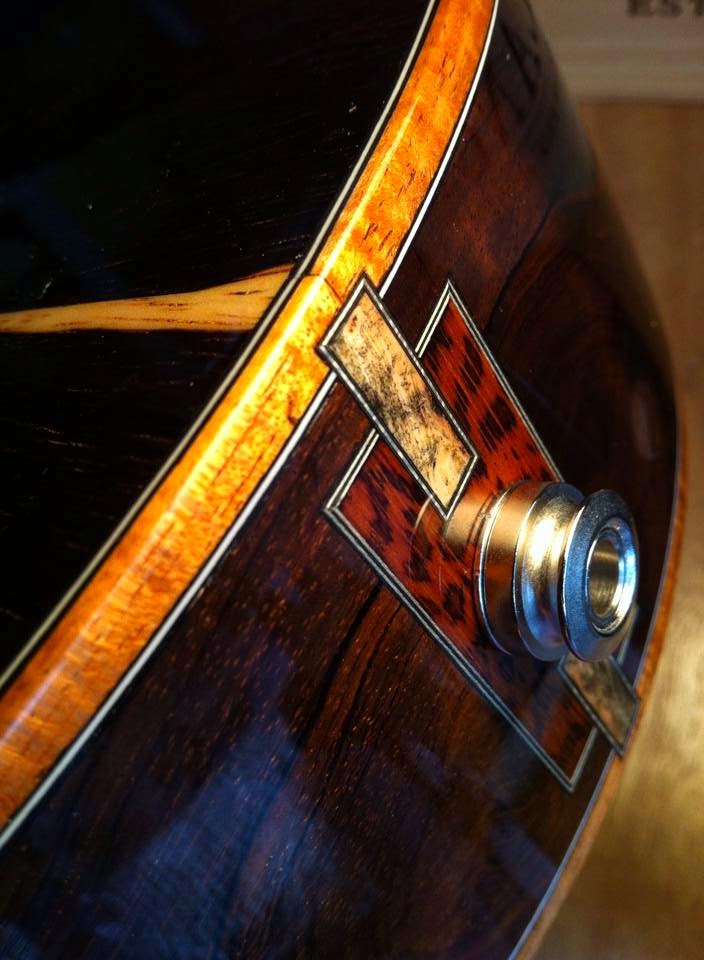 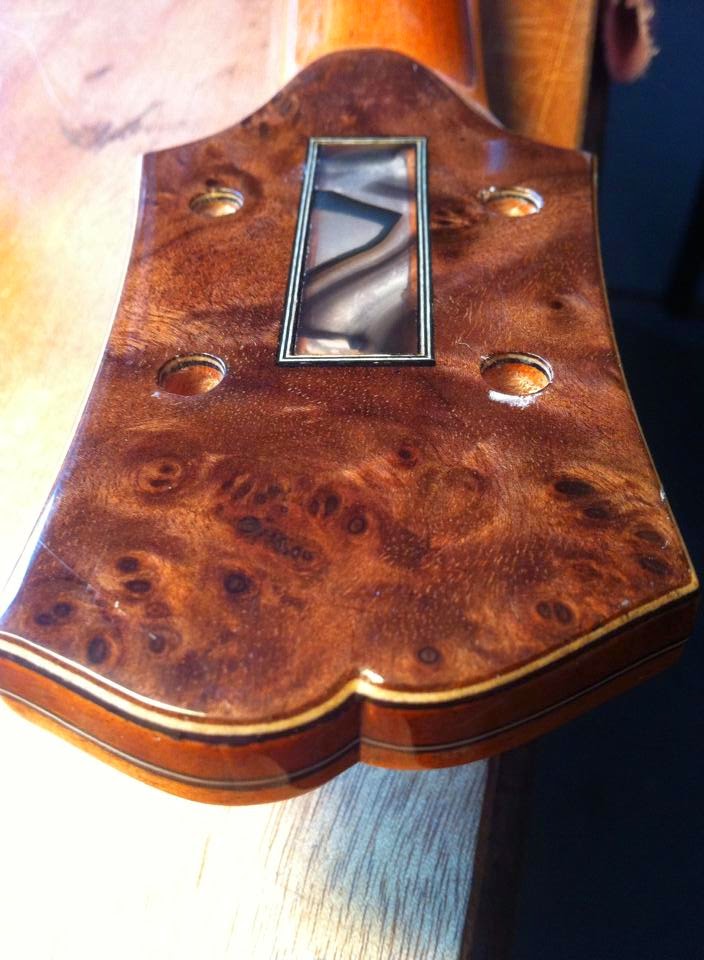 They say that you eat with your eyes first, and I believe it. While the bling might not make a difference in sound or playability, it does add a visual wow-factor element I much enjoy. Nothing wrong with that from where I sit … 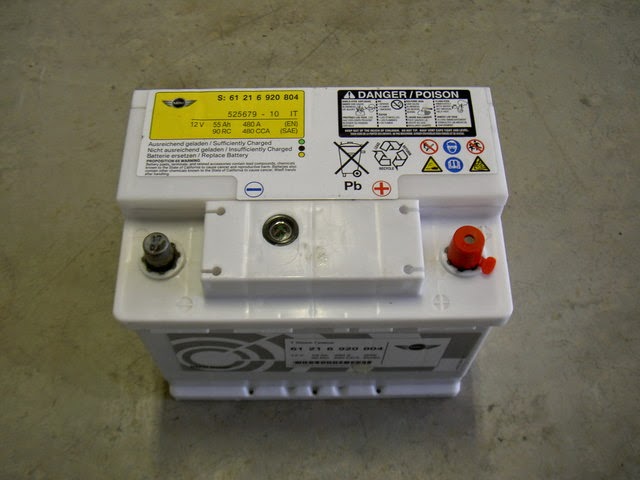 Came out of silat class on a chilly evening this week and when I turned the key in the ignition of my automobile, I got that little solenoid clicking and naught else. Enough juice to light the dome light, not enough to crank the engine.

Got somebody to jump it off without electrocuting either of us, made it home, and next day, same deal. Battery was nearly dead.

There are several things that can cause this: Alternator, voltage regulator, a short in the electrical system, or a bad battery. Given that the car is nine years old and still wearing the original factory-installed battery, that was my first thought. Generally, after five or six years, the batteries give up the ghost, usually on a cold day.

My mechanical abilities are slim, but I can pull a battery out where it is accessible. Never seem to have exactly the right tools, but that's why God made Crescent wrenches and pliers, and I managed to get the old one out, drive in the wife's car to Les Schwab's and swap the dead one for a new one.

Cannot believe what those suckers cost these days, but it's been like fourteen years since I bought one, and this was the top-of-the-line Extremo Mondo Whatevero model, good for seven years, yadda, yadda. Came home installed it, car cranked right up, and, I hope, problem solved ...
Posted by Steve Perry at 1:27 PM 1 comment: 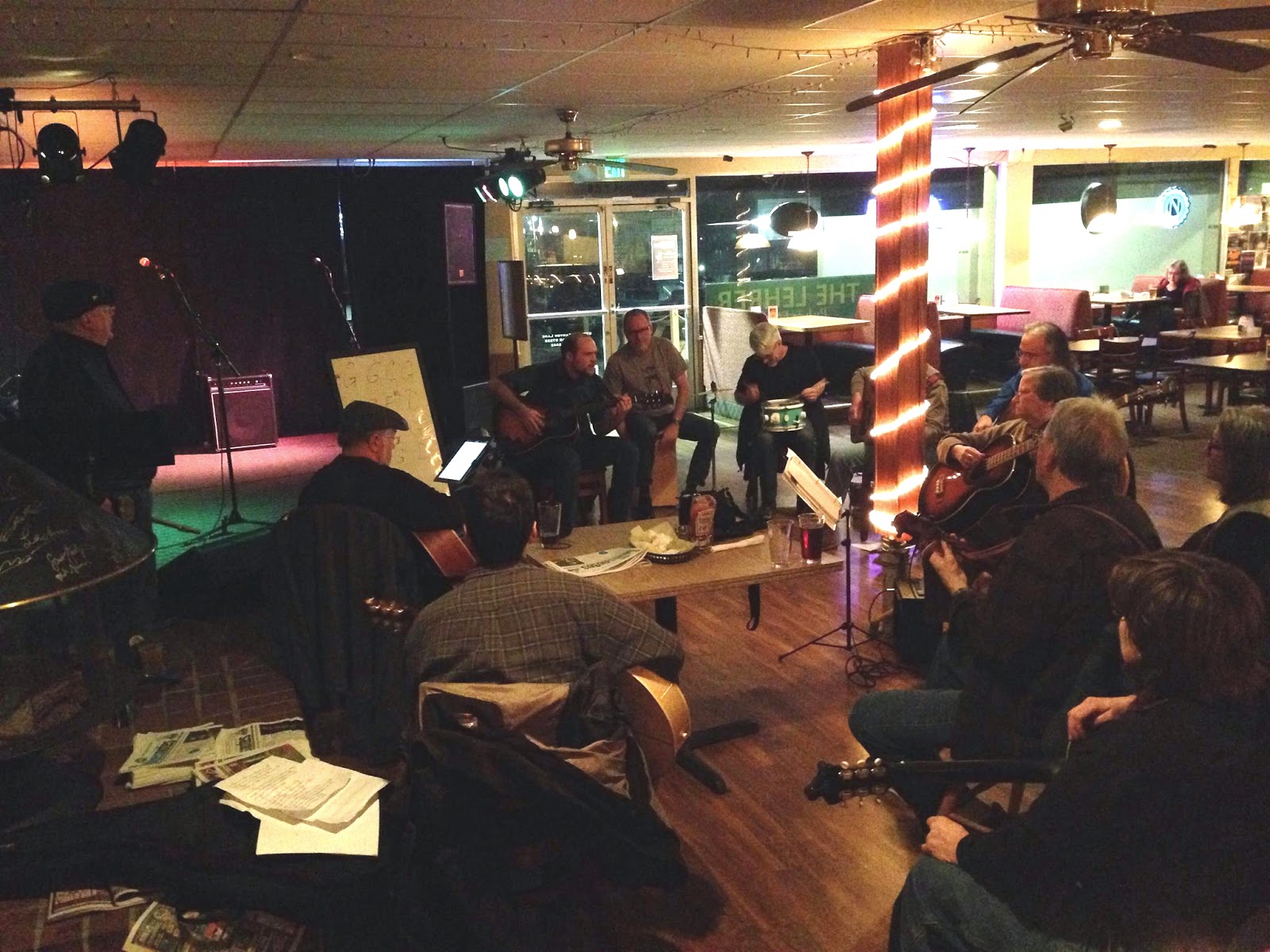 So, I have mentioned that I go to the local pub, The Lehrer, for an acoustic jam. This is great fun, the group varies from a handful, to as many as eighteen, and there are some talented instrumentalists and singers who show up.

Most recent session, there were two harmonica players, two percussionists, a flutist, an acoustic bass, eight or nine guitars, and one ukulele. None of us amped save the bass player, and we asked her to do that because we couldn't hear her.

I used to go to the blues jam, but everybody there is amped, and I wanted to retain what little hearing I have left.

On that subject, here's something I learned: At the blues jam, the volume starts out fine but quickly ratchets up. Every time one of the guitarists does a solo, the knob gets cranked, because with eight or ten other guitars playing rhythm, you can't hear the lead. And heaven forbid that any of the guitarists should, you know, turn it down so that could happen.

By the end of the session, the volume on the amps is at eleven, and how loud that is? My amp, which is a small, but decent thirty watts, turned up full, isn't able to deliver sound I can hear, with it by my feet and pointed right at me.

Contrast that with the acoustic folks, who, when somebody takes a solo, somebody else says, "Bring it down!" and everybody plays quieter, so you can actually hear the one guitar across from you doing the lead. And I can, the whole session, hear my unamplified uke just fine. Doesn't matter if anybody else can, but it helps me if I can ...

Sometimes Chuck brings a little amp and a vox and instrument mike so the song leader doesn't have to work too hard, but even that isn't necessary.

Reminds me of a bunch of folks sitting on a porch somewhere, drinking beer and playing and singing, with a fine time being had by all. And when it is over, nobody is wandering around saying, "HUH? WHAT? SAY AGAIN ... ?"