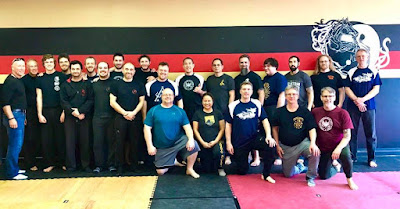 Past three days, I was at a silat seminar in Battle Ground, WA.

“Silat” here being the short version of Pukulan Pentjak Silat Sera Plinck, a Javanese martial art that features hitting, kicking, elbows, stabbing, cutting, and other ways of whacking people who mean to do you harm.

By the third day of a three-day camp, one tends to be tired, sore, and with a full cup. Given the quality of the teachers and how much they know, it sometimes feels like drinking from a fire hose, but the hope is that some small amounts will get retained …

Maha Guru (which for silat players, means “Great Teacher,”) Plinck is the best-qualified and most excellent teacher of our art, hands down. What he shows and how he delivers it is, simply, superb.

We were honored to have Guru/Sifu/Sensei/etc. Cliff Stuart up from SoCal, sharing a small fraction of his wisdom. Guru Cliff has black belts in, I think, fourteen different arts, a long career as a bodyguard to celebrities who needed such, and who has forgotten more than  most of us in the room combined will ever learn. His compliance techniques, for those times when you don’t want to have unconscious people bleed on your client’s nice carpet, were really impressive.

Guru Muda Max (“muda” meaning young here), is the newest of the teachers, and whose enthusiasm and skill was a delight to behold. Given that Max is Italian and teaching in English, it was even more impressive. He brought with him a crew of Italian players who had waay too much fun.

There were other ranked instructors training who, while not listed on the program, nonetheless helped teach the rest of us as the days flowed, notably Don Lee and Derek Sasaki.

I did a class in how to use a cane if you are impaired enough to need one to stay upright. One does what one can ...

There were twenty-some of us, ranging in age from twenty-something to pushing seventy, and, for once, I was only the second-oldest guy in the room.

A fine time was had by all.
Posted by Steve Perry at 10:54 AM 2 comments: Links to this post