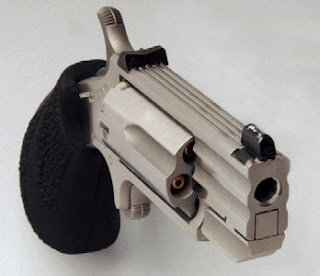 Got asked by somebody about what kind of gun they should get. Here is the long answer:

So, if you somehow feel the desire or need for a gun, you need to ask yourself some basic questions. One size does not fit all, and if you drill down to your primary reason for wanting boomware, that will answer the most important question.

1) Why do you want or need a firearm?

Gun sport? Self- or home-defense? Hunting for food? Heroic fantasy?

Let me break those down.

If you like going to the range and punching holes in paper targets, or making steel targets ring, or doing competition in scenario games, where you are a cowboy or a cop, then the activity determines the hardware.

If you want to see how close you can come to perfect score on paper targets, then you have to decide whether you want to do that close or far away. Close, get a handgun designed to be accurate. Far away, get a rifle. If you want to knock clay targets out of the air on the fly, you’ll need a shotgun.

How precise determines the weapon. Hitting a target the size of a man at seven meters needs less accuracy than hitting a dime at the same distance. A hundred-meter pistol shot at something the size of a pie place is doable. A thousand-meter shot with the same weapon and target? Not so much. You can plug it with a really accurate rifle more often than not. If, of course, you practice.

If you want to play cowboys in the action sports shooting games, you need cowboy guns, and they are defined in the rules. This kind of handgun, that kind of rifle, this here shotgun. Usually determined by the era the original saw use, and allowed-replicas have the same limitations.

If you are a hunter, the prey decides the weapon. You can hunt squirrels with an air rifle or a .22 or other small bore guns, hand- or long-guns. Close, you can use either. Far away, you need more accuracy. Knocking off ground squirrels at five hundred meters? You can do that, you want, but the tool will be specialized, and will include a scope so you can see shit.

You can’t stop a big brown bear with a small bore gun unless some god is bored and wants to screw with your head. If you shoot a squirrel for the stewpot using your bear rifle, you won’t have anything left to cook. Bigger prey needs a bigger gun.

I gave up hunting a long time ago. Didn’t need the meat, didn’t want the trophy, and I had all the advantages: the brain, the patience, and the weapon. Not my thing.

Home-defense? Pretty much most pistols, rifles, or shotguns will do the job. Tiny caliber handguns, aka “mouse guns,” don’t have much relative stopping power, but the first rule of a gun fight is, bring a gun. Shoot something ten times with that target .22? It will give them pause. Stopping power aside, more people have been killed in civilian life with .22s than any other caliber.

You do not need an assault rifle, and if you don't know what you are doing, you are going to do unintended damage if you start blasting away at the Beagle Boys  trying to steal your TV. The walls in most houses in which we live won't stop a .223 or .308, then won't even slow them down much. You could punch a hole in your wall, the next door neighbor's wall, and then kill the little old lady two doors down.

If you are a homeowner with little experience as a shooter, you should get some, experiece, and probably stick to simple hardware that is easy to operate in a hurry. If it is a handgun, get a revolver in a caliber you can comfortably shoot, because if you scream and drop it when it goes off, that’s bad. I tell people looking for a home defense handgun to get a double-action .38 Special revolver. Recoil is relatively light, and it hits hard enough with good loads to stop most people most of the time. Revolvers mostly don’t have, nor need safeties, and it is either loaded or unloaded. Point it, pull the trigger, repeat as necessary.

How do you know if it is too much or not? Go to the range and rent one and see.

Semiautomatic pistols are more complicated. Enough so that it would take longer than I want to spend here explaining the ready-conditions alone. If you don't already know, don't get one.

If you would rather a long-gun? Get a shotgun and load it with birdshot. Doesn’t matter that the gauge is, but 12-gauge is the most common, and easily found. More than enough for a burglar, not as likely to go through your walls and kill the little old lady next door.

You can also load that 12-gauge with different kinds of ammunitions and hunt birds, squirrels, rabbits, and Kodiak bears.

If you need to carry a gun when you go out? Get a handgun. Handguns are a compromise. They are a trade-off, being more portable and concealable, but less powerful.

The old joke goes: Why are you carrying a pistol? Are you expecting trouble?

No. If I were expecting trouble, I’d be carrying a rifle.

If you are walking around with a rifle in open-carry and down to the local Walmart? You are an asshole. Go away.

For self-defense in the city, the mid-sized revolver is again the easiest, but there are a plethora of other portable ones. You have to think about this. If your hogleg weighs eight pounds, chances are you aren’t going to want to haul it around, and eventually, you will leave it at home. A mousegun in the pocket beats a rhino-stopper at home in the safe.

A Desert Eagle in .44 Magnum will turn your purse into a bowling ball on a strap, and hiding it under your T-shirt and shorts? No. If you carry a big gun when it is a hot day, you have to hide it under a vest or in a belly pouch, and you also might as well carry a big, flashing, neon sign saying I HAVE A GUN! if you do that.

Experts can carry what they want, cocked-and-locked and bells-and-whistles, but experts don’t need any advice from me. Experts will fight tooth and nail over which caliber beats which other one, and it is a holy war. Not going there.

Which brings us to the fantasy stuff. If you carry a gun around, or plan to use one at home, for defense, you need to learn how to shoot it. When to shoot it. The legality. Strategy and tactics. What happens to you at the mall when you whip it out to stop the loon with the M-4 and the police see you and think you are one of them.

And you you have to be willing to point a killing weapon at somebody and, if need be, slay them. If you can’t live with that notion? Don’t carry a gun. It’s not a magic wand, and waving it won’t stop everybody all the time. Even shooting them might not do that, and afterward, you are going to have to explain what you did over and over and over, in the police station or in court.

Any questions?
Posted by Steve Perry at 4:58 PM 13 comments: Links to this post