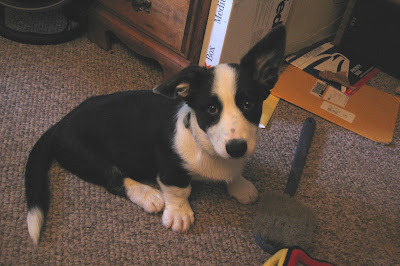 The price you pay for kittens and puppies, they say, are cats and dogs. They usually don’t mention the hidden surcharge, that of old cats and dogs who go into decline.

They are like the Flash, our furry companions; they live at a different speed than we do. They rise sooner, and fall earlier.

I’m not the first, nor will I be the last, to lament this. And it is a lesson when you go through it that the cycle of your beloved companion is the same as yours, condensed in time enough so that you might experience it several times in in a human-span, if you choose to season it with critters.

I have Cardigan Corgis, Jude and Layla, come to live with as our previous pair of German Shepherd Dogs faded and transitioned.

GSD’s are not long-lived, if you have one who gets past ten, consider it a gift. Cady left at eleven, Scout was almost fourteen, and like Mr. Bojangles, I can still grieve more than a decade after they died.

Because they were so beloved, we held onto them too long. We fought tooth and nail, threw everything science had at what took them down, and the war dragged past the quality of life they deserved. In the end, we came to realize it, and let them go, but as anybody who has loved a dog or cat knows, this is hard.

We didn’t mind cleaning up after them when they couldn’t make it to the door; nor helping them stand when they fell. That’s part of the process, part of your duty. But you have to pay attention, you have to listen and watch. At some point, they will let you know.

We learned this lesson with Cady.

Jude is twelve; Layla, eleven. Corgis generally live to be 12-15, and that being the average, that means some leave sooner and others, later. Jude is beset with arthritis, hips are bad. He’s unsteady on his feet, and no longer able to walk distances or hop up onto the curb. Everything is slow and stiff, and where we would walk a mile or two daily, we are now lucky to make it a block or two before he runs out of steam. We stay on the flats, we use the wheelchair ramps at the corner, we walk both dogs, bring Jude home, and take Layla for a longer walk.

We have rubber-backed throw rugs all over the house, because Jude has trouble standing on a smooth floor.

When he falls, we cringe. He looks perplexed. How did that happen?

Come on, Jude. You can make it up.

He is on medication, a special diet, oils, and we are doing everything available to keep him comfortable for as long as we can.

He needs to keep moving, so we urge him along, but the time is coming when he won’t want to go. He still gets excited at dinner, he eats well, that has always been his reason to get up in the morning, but where once he would hear a cookie crumb fall and hit the floor from the other room and be there before the second bounce, now his ears are duller, his vision cloudy.

If the time comes when food won’t call to him?

This is how it goes.

I hate this. I fucking hate it, but it is the cycle, I have done it before, and we might have one, maybe two more dog cycles left in us.

Not easy watching that puppy grow old and tired, but we knew it was going to be that way when we signed up.

Is it worth it? Yeah, we think so.

If you love your dog or cat? That’s the big price you pay.

Posted by Steve Perry at 11:31 AM 4 comments: Links to this post