Not available yet, but ain't it cool? 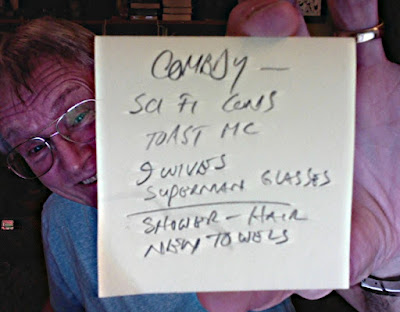 Back when I spent a lot of time going to science fiction conventions and had duty as the toastmaster, or MC at the costume thingee, I worked up what I thought were some pretty good stand-up routines and snappy patter. Three of my favorites were:

Redneck in overalls with raygun

The Man With Nine Wives

Best Job in the World: Being an Optometrist in Metropolis (This one began with me reciting the opening for the old George Reeves TV Superman show, with a tape recorder playing me humming the music for that show as b.g.)

“Faster than a speeding bullet!” (Dum-de-dum-de-dum-dum-de-de-dum)

I was, I thought, a pretty funny guy.

We have company coming up for the eclipse in a couple days, and my wife remarked that maybe we might want to buy a couple new towels.

Me: Um, well, we’ll have to wash the new towels like five times before they get here. In two days.

Me: I went to see my buddy and his wife a few years ago, and his wife bought some new towels for me. I don’t think she washed them at all, though she might have, once. Have you ever tried to dry off with a new, unwashed towel? You might as well use a giant sheet of Saran Wrap covered in Scotch Guard. You do better sluicing the water off with your hands!

Her: I’m sure you exaggerate.

Her: Well, you can get what color you want. Those nice blue ones.

My wife is the sweetest, nicest, most lovable woman in the world, bar none, but like many women, she thinks that men worry about things like what color their towels are.

Don’t you think the blue ones are nicer than the tan ones?

Uh … yeah, of course. Sure, I do. The blue ones. Definitely.

Same way I do while sitting at supper and getting into a conversation about the dinner plates: Don’t you just love the pattern on these dishes?

Pattern? They have a pattern?

We have been using these dishes for twelve years!

Um. Oh, wait, you mean these dishes. Sure, I … love this pattern. Hey, look, it’s almost time for the news!

So I decided to shower before I headed to Costco. I was thinking about what I needed to buy, getting a new belt for the vacuum cleaner and all, and of a moment, I looked around. Did I wash my hair? I honestly couldn’t remember.

That ever happen to you? No? Just me? Well, crap!

Which is why I have learned to write little notes to myself on the yellow sticky pad on my desk. Because memory is a sieve; if it is on the pad, I will see it eventually.

Which is where the picture above came from. The note I wrote to myself to remind me to write this piece ...
Posted by Steve Perry at 12:11 PM No comments:

“I grow old, I grow old … I shall wear the bottoms of my trousers rolled …”
T.S. Elliot, The Love Song of J. Alfred Prufrock