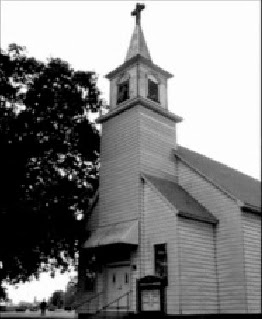 I recently posted a song on SoundClick!, a melding of an old folk tune and the words of a classic hymn -- House of the Risin' Sun and Amazing Grace; Tonia, a woman who calls herself a tree-hugger, did a slide show of an old church and graveyard, and used the piece for background music. Have a look (and a listen ....)

The songs: Risin' Sun Blues, aka House of the Risin' Sun, is attributed by the folklorist Alan Lomax to Georgians Georgia Turner and Bert Martin, based on the tune of a traditional English ballad. First recorded in the early 1930's, it came full circle when done by the British group, The Animals, in 1964. Before that, it was a staple of American folk singers, from Woody Guthrie to Bob Dylan.

John Newton was an Englishman and former slaver who wrote Amazing Grace after his conversion to Christianity in the late 1740's. The verse about being here "ten thousand years," was added and made popular later by Harriet Beecher Stowe, in Uncle Tom's Cabin, and is sometimes credited to John P. Rees.

My version, called House of Grace, was inspired by that of the Blind Boys of Alabama.
Posted by Steve Perry at 11:18 AM

You should maybe think about doing it as a three part harmony sometime, I think that would be fun.

The pictures went well with the music.

I've got at least a dozen versions of Amazing Grace; my favorite, by a big margin, is the live, nearly a capella version by Joan Baez.

Newton gets slack he doesn't deserve, IMO. He continued the slave trade long after his "conversion."

I got to hear Joan sing that once. She came out during a Bob Dylan/Rolling Thunder Review show and did "Diamonds and Rust," with Dylan, and then Amazing Grace by herself, no instruments. Man, the woman had a voice.

Newton gets credit for the song. Zevon's music is great, even if he was a dick in person. Sometimes, the art is superior to the artist. I like knowing where it came from, being a nosy bastard, but that doesn't always matter to the end product. It has to stand alone.

I've tried two-part harmony on a couple pieces -- amazing what you can do with GarageBand and an inexpensive USB mike to lay down tracks.

Only three-part harmony I've ever done was years ago, in the cassette tape days, an acapella thing I wrote, "Run and Hide," a lament on a TV writer being chased by the devil because he's sold out to the tube.

It was short and pithy, as done by the All White Boy Choir ...