It's the Real Thing II 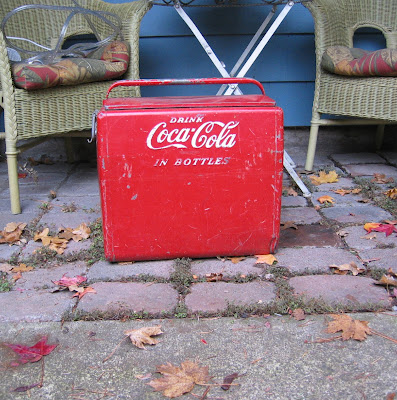 My wife's grandfather passed away more than thirty years ago. When, ten years after he died, we went down to fetch Momee, who had drifted into Alzheimer's, all of Paw-Paw's stuff was just where he had left it. His watch and car keys were still on the dresser in his bedroom. It took a week to clean the house out, it was like Fibber McGee's closet, floor to ceiling, stuffed full. Nobody had moved anything in forty-odd years of living there. We found Christmas presents in one closet from 1962 that had never been opened.

We had a major garage sale. We dumped a lot of stuff -- and the garage sale attendees ripped open all the bags and strewed it all over the place.

Once we had packed a big rental truck chock full of good furniture and keepsakes for my mother-in-law and the three granddaughters, my son and I drove it from Baton Rouge to Portland, by way of L.A. A fascinating trip. Towing Momee's car on a trailer behind the U-Haul van, we were long enough so we had to use truck stops a lot for gasoline. Whole other culture at those places.

I came away with five items from Paw-Paw's closet and tool chest: His Winchester Model 97 pump 12-gauge, a long-barreled duck gun. When I took the butt-plate off, I found rolled up in the stock's chamber a hunting license from 1927.

There was a little shop knife, four-inch blade, which Paw-Paw, a professor who taught industrial arts at LSU, had enscribed his initials. CGM, for Clayton G. Mainous.

There was a framed lithograph of two black women singing in a club in New Orleans, circa the early 1940's. This turned out to be by a well-known artist of the period, Caroline Durieux, who, while she was teaching at LSU, developed a new method of lithography using radioactive ink, the electron print. She gave the print to Clayton and Emma, and as I found out some years later, the original is in the Library of Congress.

I found a brick of .22 ammunition in the top of Paw-Paw's closet, that's a box of ten, circa 1935. Still shootable, even after living in the Louisiana climate for almost fifty years -- I fired a box or two at the range and all but two them cooked off. He must have had a .22 rifle at some point, but we didn't find it.

Finally, there is the Coke box. A steel case, with a zinc liner, the cooler is pretty efficient. Thanksgiving Day, I stuck it out under the eaves, filled it with soft drinks and a bag of ice from Safeway, and as of this morning, there were still little bits of ice floating around in the cold water. Nine days, and even though it has been chilly out, that's pretty good.

Snowing lightly outside my window at the moment, and right at freezing. The hummingbird perched on the feeder doesn't look happy about that. They say the snow won't stick for long -- we have tropical rain coming, starting tonight or tomorrow, that will raise the temperature twenty-five or thirty degrees, as well as bringing some gusty winds.

If you don't like the weather in Oregon, all you have to do is wait a little while and it will change.
Posted by Steve Perry at 9:01 AM