How Not to Measure Fitness 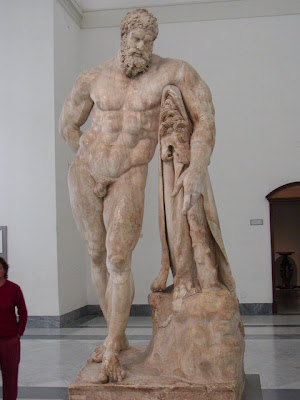 There are all kinds of ways to measure how physcially fit you might me. I'm here to talk about two that aren't good methods:

For those of you who don't know, BMI does a ratio between your height and weight, and assigns a number to this ratio. If it this number is under 18, you are considered too thin, and if it is above 30, too fat. If your BMI is, say, 35, you are morbidly obese.

A lot of doctors use the BMI without bothering to notice that it has a major flaw.

Doctors, when I was in the field as PA twenty-five years ago, were woefully unaware of the nature of fitness. We had a patient come in for routine physical once. He had a resting pulse rate of 48, and the doctor who saw him was all set to run a shitload of tests and maybe stick him into the hospital -- sinus bradycardia (slow heartbeat) can be dangerous.

Thing was, I was training to run in a marthon at the time, reading Runner's World Magazine, and The Physician and Sports Medicine, and the patient looked fit, so I asked him if he was a runner.

I then explained to the doctor that aerobically-fit jocks developed the heart just as any other muscle will if you work it, and that at 48 beats, this guy was pumping blood the way an average person would at 72 beats per minute. The slow rate was not a problem, but a measure showing much fitter than average his heart was, aerobically-speaking.

The doctor had never heard of this.

BMI's big flaw is that it does not speak to percentages of muscle and body fat. When Ahnahl the Governator won the Mr. Olympia Contest as the most muscular man in the world, with a bodyfat less than five percent, he was, according to his BMI, "morbidly obese ..."

Weight varies for a lot of reasons. Thursdays, I usually fast. Black coffee, lots of water, now and then a glass of wine in the evening, but no food.

This Thursday when I got up, just for fun, I stepped onto the bathroom scale: 206 pounds, which is close to what I usually weigh.

Thursday night, after not eating all day, but drinking a couple liters of water and three cups of coffee, it was 202 pounds.

When I got up this morning, 200 pounds even.

I was no fitter at noon than I was at nine a.m., given that all I did was sit in a chair and type.

There are ways to measure bodyfat, aerobic fitness, flexibility, and strength. Use those. Not the bathroom scale or the BMI. You can go down two pants sizes and gain weight -- muscle weighs more than fat because it is denser. You jock out, get tighter, lose inches, but can weigh more.

I've always hated the Body Mass Index. You can tell much more by just looking at a person than you can using the BMI.

I had a friend at university who was 5 feet tall and 140lbs. She was also a rugby player, an avid outdoorswoman from Alaska and was studying to be a physical trainer.

She came back from class one day and was absolutely crushed to find out that she was overweight and close to obese. This was the fittest girls (and one of the most attractive) I'd ever met. She could out run and out hike me and she could probably kick my ass too.

I was shocked to hear that she actually believed in the BMI as a valid testing measure, as did her teachers and her fellow students! These were people who were studying in the health and fitness field and they still believed this crap.

It gets worse. When I was at UCSC in a weight-training class, the instructor did a BMI on the whole class using the skin pinch method (if you've never had that done, they measure the thickness of a fold of skin on the underside of your arm). According to which, I was morbidly obese. At the time, I was probably in better shape than I've been before or since; besides the weights, I was running, doing eskrima with Mike Inay's group, and walking all over the Santa Cruz campus every day, which is pretty much like hiking a couple miles of the Pacific Crest trail.

She did say that she had noticed the skin pinch tended to give high results for Asians (and part-Asians, I guess). She thought we might have more or different-textured connective tissue under the skin at that point. So not only is the BMI itself not valid, apparently some of the ways they use to measure it aren't very accurate...

The skin pinch method doesn't relate to the BMI, but is one of the anthropometric methods to estimate body fat percentage. It's a really horrendous method, as it is based on a statistical model, applied to a (usually far too small) population sample, based on which a formula is derived. On top of that, the skin pinch method actually measures overall average body density, body fat percentage is actually derived from it, using a second model and formula. The resulting body fat percentage 'measured' by the skin method, contains errors of the actual measurement, and of the two models, cumulatively. Apart from Asian versus not Asian, depending on which method you use, it could be off because of your age, gender, physical fitness, what exercises you do, etcetera.

And, umm, yes, I happen to have looked into body fat percentage measurements that did not involve submersion measurement to get a body density measurement. My doctor, a specialist in internal medicine, was realistic enough to admit that there really wasn't anything convenient and affordable that was accurate. I didn't, and don't, really care about the number, I just wanted a baseline before changing exercise program/diet/lifestyle, whatever.

The little scales you can buy that do it electrically, to measure resistance are all over the map and not particularly accurate.

Best easy and cheap way is to look in the mirror. Waist fat is where it seems to do the most harm. If you can grab more than a handful at your waist, probably you could stand to lose some.

Some cultures, fat was an advantage, evolution's way of helping people get through the hard winters, or being able to stay home and care for the children and not have to hunt as much.

Given houses and central heating, not so much an advantage any more, the benefits not outweighing (sorry) the associated health problems.

Oh, and that said, carrying extra weight by itself is not a measure of fitness, either. I saw a PBS show once on obesity and just to screw things up, they did a piece on a short, heavy guy -- 5'8", two hundred and sixty pounds -- who routinely ran marathons.

A guy who can *walk* a marathon distance is aerobically more fit and has more strength in his legs than most people -- especially, however thin they might be, couch potatoes.

Being fit doesn't guarantee longevity -- best bet there is still to choose your parents wisely -- but being fit does affect the quality of life you have, however long it might be. Fit is better.

Immersion measurement measures body density and uses one of two different models to calculate body fat percentage from it.

There are a few problems: there are two major different formulas for deriving body fat percentage from measured body density, giving a few percent variation; the measurement for body density requires for a body underwater with empty lungs, and even a small amount of air in the lungs makes a difference; the measurement assumes average amount of bone tissue, and variations in that affect the measurement.

Dual X-ray absorptiometry is reputedly very accurate. I've read that near infrared light (bounced off of the muscle layer and measuring how much is absorbed by fat along the way) shows a very good correlation to it. I've no experience with either.

Then again, I mostly go by how I feel, and how I look. I am interested in something that I can easily get done, ideally easily do myself at home, that measures body fat percentage consistently, just to monitor changes.

Or you could save the money that you would spend on the pseudoscientific tests and buy a set of weights and a pair of sneakers :-\

I'll go with the better use of your money, but pseudo-scientific? Nah. Specific gravity's been around for a long time.

Me, I go with the denim measure: can I still get into my jeans? If not, it's time to do something about it.

An additional point on the skin fold technique, speaking as someone who has been trained in it's use. There are a bunch of different systems out there for it, largely differentiated by the number of sample sites they use. The two best methods use 5 and 7 measurements respectively. This means it takes 7 measurements to get all of the results and then you weigh the subject and run the numbers through a formula to get the results.

And all of that is assuming the test is administered by the same practitioner using the same tools.

That single measurement under the arm test that they used on you Tiel? It produces results that are only useful for taking up paper when they are written down.

Oh, and most of the data they used to build the formulas were actually derived from corpse tests. One more source of error, considering how things settle and harden after death.