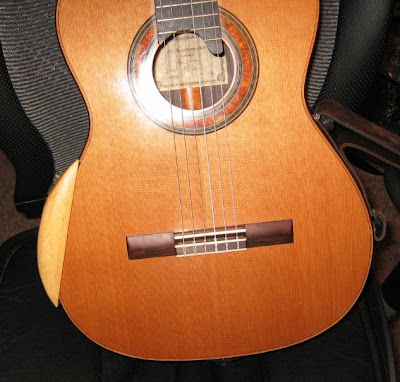 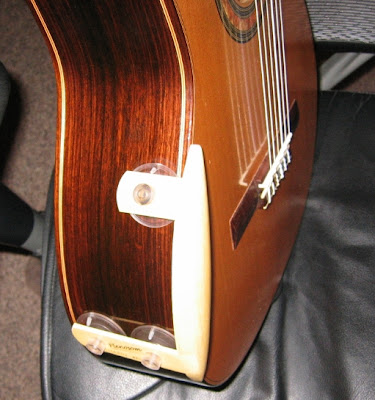 The general size and shape of the classical guitar has been pretty much the same for a long time. Luthiers like Torres and Hauser found what seemed the optimum configuration, and most classical guitars made since hew pretty close to their patterns. Some variations, of course, bracing, materials, but not radical.

It's a wonderful instrument, the classical nylon-string, but not nearly as loud as steel-string acousticals, and without the same resonance and sustain. Steel tends to ring longer than nylon.

Most of the energy that comes from an acoustical guitar is generated from the top. Depending on which expert you ask, the back and sides count for a small percentage of the tone, some say as little as ten percent. The Spanish builder Torres once built a guitar with a papier-mache back, just to make the point, and it sounded pretty good.

When you play classical in the standard classical position, you sit in a chair or on a bench, the guitar's waist is balanced on your left left leg, your foot propped on a little stool, so that the neck angles upward, somewhere in the forty-five degree range. In order to keep it there, you drape your right forearm over the edge of the lower bout as you pick the strings.

This does several things: It slightly dampens the sound, since the entire front is not free to vibrate. It allows the sharp edge to imprint your forearm with a nice groove that can be uncomfortable during long sessions. And if you aren't wearing a long-sleeved shirt, it allows sweat to attack the finish, and with French polish, which is not uncommon for classical guitars, that's bad.

The foot-on-a-stool pose can, over the long run, cause problems with your back or hip. To remedy this, there are props, one of which is called a Neck-Up. This allows you to keep both feet flat on the floor, and for my money, is the way to go. The device attaches to the side of the guitar with suction cups, and is made of leather.

I have three guitars, and I use these on them all every time I play. The suction cups, which look to be silicone, haven't bothered the finish on any of them, and I've used them for a couple years.

Now, to counter the forearm problems, you can buy a suction-cup device, called a Plenosom armrest. This was created by a South American classical guitarist, and is sold through Maple Street Guitars. I just got one. Made of Brazilian ivorywood, it does seem to do what it advertises.

It certainly is a smoother platform upon which to rest one's arm; it will keep the sweat off the bout; and it seems to allow a bit more volume, clarity, and sustain.
Posted by Steve Perry at 2:58 PM

Three guitars, eh? Well, the herd is bound to increase; it's just the nature of the beasts. And remember: there's no such thing as too many guitars. If you ever want to try something a little different, I could make you a great deal on a Deering 6-string banjo. With the resonator attached, you don't need no stinkin' amplifier, and you can blow acordian players right off the stage. I got a special license from the EPA to play one of these with steel finger picks...

I believe it was Willie Nelson who said that the definition of perfect pitch was when you threw a banjo into the trash bin and you hit an acordian ...

Me justifying another guitar ain't gonna happen unless I turn pro and can make enough money using one to afford to buy another -- unless I sell one of the ones I have.

Q: You see a banjo player and an accordian player walking down the road. Which one do you run over first?
A: The banjo player (duty before pleasure).

And this one from El McMeen: How do you tune a bodhran? Shove a pennywhistle through it.