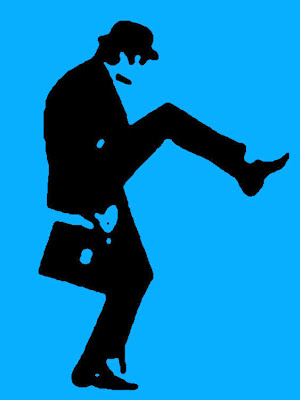 So, Christmas Eve, home, quiet, and Dianne and I opened a bottle of champagne and went and sat in the hot tub. Very nice.

Half an hour later, I got out, went to fetch some more tablets for the brominator.

The deck this time of year, after a couple months of Oregon soggery, is mostly covered with a fine layer of moss and mold, turning it very slippery. I should have given it a wash with bleach to kill that stuff, and I was going to, eventually.

Three steps away, hit the slickest patch, both feet straight out and a sudden quick trip from upright to flat on my back ...

Falling is a fast thing, that thirty-two-feet-per-second-squared stuff. No time to think at all.

Quite the thud, and major chagrin. Us martial arts types take it as a personal failure when such things happen. Slip? Fall? Not moi! Had I been paying proper attention, had I not been champagned and hot tubbed, why, it would never have happened! Big lapse. It is to feel shame.

Alas, into each life, a little prat must fall ...

Fortunately, however, all those years of being thrown hither and yon paid off. Though I landed flat on the deck, I did so head up, arms outstretched to break the impact, just as if I meant to do it that way, and ... no harm, no foul.

Not as soft as the yard at Guru's, but a lot softer than Cotten's garage floor.

Once before, when I was living in L.A. and doing a lot of rolling and falling in the Okinawa-te class four nights a week, I was jogging across a gas station lot to pay the attendant when I slipped on a patch of oily concrete. My momentum caused me to take a header, and somehow, I tucked, hit on a shoulder, did a roll, came up, and kept going.

When I got there, the attendant stared at me. "Jesus, did you do that on purpose?"

Which, while not strictly true, in that I didn't want to take the dive, I surely did want to come away with nothing broken. I was amazed that I did.

It's this kind of thing that makes me think that, in the heat of -- or as in the deck instance, cold and nekkid of -- the moment, that some of this martial arts stuff will be ingrained enough and there should I need it.
Posted by Steve Perry at 10:33 AM

That's one of the reasons I think Judo is a great thing for kids. You might never get in a fight. But everyone falls down.

Oddly enough, Dianne - Who is half the size of Steve, and doesn't train a martial art - Didn't fall.

Ah yes Asshopper, and what did we learn from this lesson?

Because she was still in the tub and I washed off the slick spot with my arse ...

The lesson? Champagne and hot tub to excess makes for extreme caution if you want to survive.

Didn't you fall off your roof a few years ago? Man, you are getting good at this! Practice pays off, eh? And a friend of mine, John Pratt, claims to be the direct descendant of one Sir John Pratt, an English knight who is supposedly the source of the term "pratt fall". Seems Sir John had problems when it came to staying on his horse.

Yep. Cleaning out the gutters, maybe twenty-five years back. I stepped on another slick spot. I didn't actually fall off the roof, I sat on the shingles hard, bounced, and since I knew I was going over, pushed off and jumped. Only about seven feet and to the grass.

I can pretty much remember every time I've had a hard fall since I've been an adult, and all of them are connected to ice, mud, water, or some combination thereof.

I've learned to wear yak-traks if we have icy walks, not to go down muddy slopes, and that I need to keep the deck de-molded.

Lemme rephrase that: I recall the accidental falls. The ones where my fellow students tossed me during martial arts classes are too many to keep accounted.

A couple good ones I do remember, the most recent when one of my fellow silat students and I did a technique and after we were done and I was turning to step away, I got swept. My fault. I made two mistakes: One, I misjudged the student, who was somebody who'd never kept going before, and, two, it didn't matter who it was, I shouldn't have let my guard down.