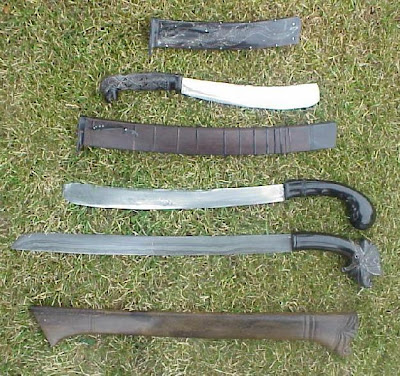 So, Bobbe Edmonds was in town yesterday visiting Todd and Tiel, and dropped round for a silat class.

To warm up, Guru decided that we needed to work on short-sword (ours is called a golok -- which is machete-length, though generally with a slightly-curved edge. The principles are more based on length, and that there usually isn't a guard between the blade and handle, which makes a big difference in how you block a cut. Though not all of them do, the most useful goloks have points, so that you may stab as well as slash.)

At the end of this dance, I was warm, except for my shoulder, which was frozen. The idea of keeping my elbow down somehow hasn't sunk in yet. It didn't help that I was working against Cotten, who has gained forty pounds of muscle over the last couple of years, most of it in his arms, shoulders and chest ...

We practice these drills with sticks instead of blades, but not using them like sticks -- there is a difference. The wood and plastic things are much lighter than steel, and even though they aren't blade-shaped, one must always be mindful of one's edge. A stick is not a blade.

Um. Anyway, I wound up working with Bobbe on the next set of exercises, which was absorbing and deflecting a punching attack, working on different aspects of timing. This drill requires that you stand mostly still as the attacker comes in, which you wouldn't do in a real dust-up, but for learning the process, is better. He punches, you help him miss, and set up for a sweep as he flies past.

Given all fun back-and-forth Bobbe and I do in blogland, I decided maybe it was time to say something nice about him.

Yeah, he's not TOO bad for a kid, usually doesn't trip over his own feet more than once or twice a day.

Another twenty years and he will get interesting :-)

Among my favorite blades, goloks are a close second behind ginuntings.

Wow, thanks Steve. As far as backhanded compliments go, that one didn't sting all so bad.

Of course, I had to slow things down a bit with you. Can't have you croaking on me as a result of exhaustion...Which I hear you're, ah, *prone* to...!

Well, yes, Kid, I appreciate your concern, and I knew you must have slowed down, because at the speed you were moving, a broke-shell snail could have gotten out of the way.

I mean, I coulda gone and had one of your Schludrwiller beers, taken a nap, and gotten back between the time you started in and you got there ...

No need for you to take a nap, you looked as if you were suffering from narcolepsy already.

Well, sure. Watching you move in slo-mo that way is kinda like watching trees grow -- no point in staying awake if I can deflect you in my sleep ...

So, I was deconstructing and dissecting the moves in the short-sword work we've been practicing, because I somehow was not getting the groove.

And, of a moment, it dawned on me I was trying to make it complicated when it was really very simple:

It's all right out of the djurus.
Every move.

Sometimes you can't see the forest for the trees in the way, and it's something of a thrill when you realize it and suddenly, there it is.

Think by now I'd have figured that out, but, no, getting to the age where I can hide my own Easter eggs does offer some challenges ...