The Eilandia Chronicles: The Dreadnaught 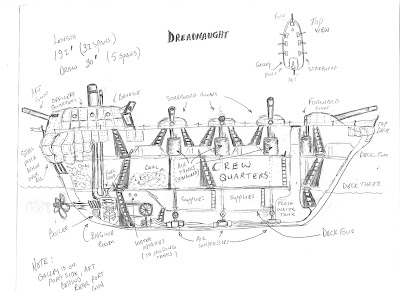 Been cranking away on this sucker, our fat fantasy, for a while. Coming up this week on four hundred pages in manuscript form. We're shooting for about seven hundred pages total for the first draft. Hoping to get it done this fall.

Book One of the Chronicles, of course ...

Above is a cartoon sketch I did so we (my collaborator Reaves and I) would remember the general layout of the ship. Its not huge, but it's the only steam warship on our made-up planet, and also the only vessel with real guns -- air-powered -- so none of the other countries navies will be sinking her in a sea battle.

Most of our world's technology is late Eighteenth or early Nineteeth Century -- sailing ships, horse-carriages, coal oil lamps, like that. Small magicks exist, but nothing major.

One country, Stahlrogia, has gotten a jump on the rest of the planet, they've got steam-power, trains, DC electricity, and big ambitions ...

Stay tuned. Once we get a draft ready, I'll put up some preview scenes. We think that folks who like Reaves' stuff, or mine -- or both together -- are gonna love this one.
Posted by Steve Perry at 1:52 PM