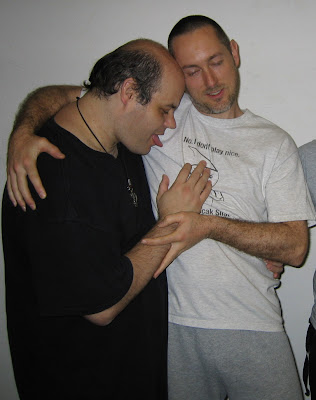 From time to time, I exchange barbs with Bobbe Edmonds, a young silat teacher in Washington state, who is also a computer guy and a writer, as well as a devotee of stale foreign beers, zombies, and curry.

Sometimes these exchanges seem, well, harsh, to people who don't know that we are just playing. A variation on doin' the dozens, in which the players rag on each other in a juvenile form of one-upsmanship.

Real men don't hug each other, they punch each other on the shoulders and make manly-jokes. Lonesome Dove tells it like it is.

I just wanted to set the record straight, for those who might not notice that the tones and tenors of these conversations are tongue-in-cheek. Bobbe really is a sweet fellow ... and here is a picture I borrowed from Jay Carstensen's site to prove it.

I believe it captures the essence of the man perfectly. That's Bobbe, on the left.

Good Lord, get a boxing gym you guys.

Yeah, that is match alright.

No need. Bobbe's got a silat school, and I have the sand pit at my teacher's house ...

That was at the boxing gym! *heh*
The funny thing is I had no idea that was happening, but was not surprised when I saw it and the look on my face is precious. I am pretty sure you will not see that at ANY other gathering...well until Bobbe comes to visit me.
(minor correction, Steve, it's Carstensen, thanks!
Jay

Big Brother's eyes are everywhere, so you have to assume anything you do in public could wind up in a camera.

I recall the advice about posting on the internet when I first started -- never post anything you wouldn't feel comfortable defending in front of a judge and jury ...

Sorry about the misspelling of your name, Jay. Fixed that.

I did choose to put that picture out on the net and Bobbe thought it quite hilarious at the time!
The adage about the internet holds true and I will stand up in front of a jury and declare.....you all may ponder that one.
Take care all and I am glad I could put a smile on someone's face with that shot. I can only imagine the look on Steve's face when he saw it!
Jay
Thanks for the correction Steve!

Bobbe looks like he's one hit away from doing the Thorazine shuffle...the other lad doesn't seem to mind the attention though..LOL...drool comes out in the wash!

What is really funny is in the rest of the picture, Buzz and I are straight-faced, just knowing that, yet again, it was going to be a classic Bobbe moment.
And he does not disappoint...