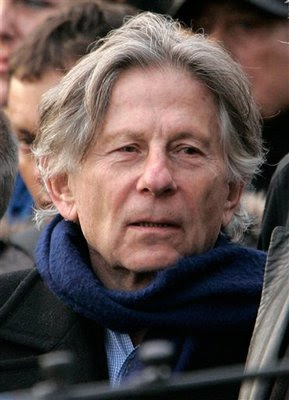 Roman Polanski was freed by the Swiss, who refused to extradite him to the U.S.
As long as he stays there, or in France, the U.S. can't legally touch him. I'd guess he won't be doing any travel to anywhere that is apt to bust him and send him back to California.
I wrote about the case here, and while there are a bunch of folks who will undoubtedly celebrate this as a victory of some kind for the arts, I don't see it that way. He wasn't arrested because he was a bad director, because he was -- and is -- top-of-the-line good at that. He was busted for plying a little girl with booze and ludes and raping her.
Just another example of how the laws are different for the rich than for the poor.
Posted by Steve Perry at 9:45 AM

I guess if you're rich and famous enough drugging children and raping them up the ass isn't a crime.

Nope, it's still a crime -- they busted him for it and he was out on bail when he skipped town, the state, and the country and ran to France where they don't extradite their citizens, which he hurriedly became.

How many of us could afford to do that, then continue working in our chosen field making millions for forty-some years? While continuing to -- ah -- "mentor" young women?

The law, in its majestic equality, forbids the rich as well as the poor to sleep under bridges, to beg in the streets, and to steal bread.
-- Anatole France

Steve, I believe you're misrepresenting the case here. (A) Polanski intended to plea until the judge / D.A. decided to inflate the charges into jail time (B) the victim in this case no longer wishes there to be a conviction and asked the LAPD to drop the charges in 1997. She supported him coming to the U.S. for the Pianist oscar. He paid her monetary damages. (C) the French really dislike trials in absentia. See what they felt about Ira Einhorn. Who is a far worse criminal in any book.

I don't know what you blogged about earlier as to the facts of the case, but you've drifted from reality (as defined by wikipedia, forgive me) here.

Unfortunately, when one asserts things loudly enough even in absence of the facts, the majority of the Internet community doesn't bother to do research on the issue, they just post things like "I hate pedophiles," and / or bash the French. (Nice, by the way.) People seem to confuse a blog with actual journalism which involves research, accuracy, and fact-checking. (funny thing, for Palin this is a modus operandi and you disapprove, yet you haul out the same tool here as if it's not got blood on the handle).

I hope it makes them feel better, responding with screwed-up self-righteous fury when the situation isn't accurately reported, but it just makes me shake my head.

Oh, and if I remember correctly, Roman had French citizenship long before the case arose, courtesy of being, like, born there. Droit de la terre et tout ca, alors. Tant pis.

Oh, and it's not a trivial thing to fetch French citizenship, as you seem to be implying in the actual blog post--so saying he went out and got it like a copy of Le Monde is a little stretchy.

Let's also keep in mind Charlie, Tex, et. al. killed his eight months pregnant wife, Sharon Tate. Let's try to inject a side order of context here to go along with the main course of decide before learning or disclosing the facts / straw man phase.

And of course, let me know if I'm wrong on any of my "facts" since I'm going largely by memory and wikipedia.

Last I heard he was married. To Emmanuelle Seigner, who starred alongside Harrison Ford in Polanski's Frantic. Not so sure about the "mentoring" you assert in the character-assassination phase comment directly above. I haven't seen anything about him molesting women in France, as you assert. Or slander.

I get you're mad, that doesn't give you the right to, like, make stuff up, now does it?

Writers do such a messy job when they try to get political and act as journalists, don't you think?

Oh, and isn't the phrase "if there's grass on the field, play ball" an AMERICAN PHRASE? SO thanks for bashing a whole culture.
Perhaps since we're doing that, the French can point at the man-boy love organization and say all Americans and thus you are also a pedophile. That would be a fair characterization n'est-ce pas?

Or would you not wish to be hoisted by your own petard?

I know I don't exactly sound neutral, and I try not to seethe, but I think I pretty much failed on this one. I'll try to be more fair in the future, I hope you will, too.

If you'd read the link to my earlier posting, you could have saved yourself some wordage. And perhaps even some embarrassment. You're talking through your hat.

I did my research on this topic. I also saw the documentary on Polanski, and I've yet to see anything that says he didn't liquor up and feed a soporific to a thirteen year old girl and then rape and sodomize her. By definition, due to her age.

I was living in L.a. when the Manson family did the Tate/LaBianca murders. I remember the reports because at one point, some of the Family passed through our neighborhood, only a couple blocks away.

So, if your wife gets murdered, that gives you leave to molest children? Some cause-and-effect relationship there of which I am unaware?

He liked them young. Said as much when arrested. And the trial transcript, which I read, is online. Before you accuse me of misrepresenting the facts, check it out.

Straw man? Oh, please! What is worse than a writer trying to get political and be a journalist? Well, maybe comments by a critic who gets his information entirely from memory and wikipedia, hey?

Yeah, I took a cheap shot at the French -- they are such easy targets. Do you know what the legal age of consent is in France? I do. Look it up.

The French don't permit extradition of their citizens. So if you decide to go on a killing spree abroad and then manage to flee home, you might get tried for it in France. Or not. You won't be forced to stand trial where you did it if you don't want to go.

Any major deviation from reality is not on my part. If you've bothered to do your research, you'd had seen a couple of other names of teenage actresses linked to Polanski. I found them, surely you can -- and thus my bringing it up isn't a creative slander, but a finger pointing at published sources. I didn't make it up.

Victims only sometimes get a say. Polanski's victim had hers at his trial, which is why, along with his confession, he was convicted. That Polanski paid her off later and she no longer holds a grudge does not alleviate the crime. He did it, he said so, and whatever machinations the judge and lawyers and investigators got up to don't change that.

The man broke the law, skipped out on bail, fled the country, and had a nice life living high on the hog since.

The man is an admitted child-rapist. Anything past that is smoke and mirrors. If you are seething because a convicted pedophile might have to do jail time, I'm not too upset to be the cause. He had it coming.

I'm afraid if it was my little girl, I'd have to recommend high velocity transcortical lead therapy. I guess I'm just not very spiritually evolved.