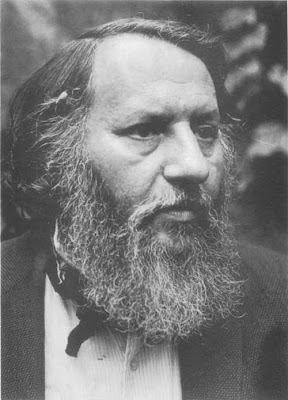 Avram Davidson
1923-1993
There is in our society a tendency to conflate an artist with his or her art, i.e., an actor with his role; an artist with her subject; a writer with his novel. The kindly doctor on that medical show you love -- or the nasty doctor on the other medical show who is a know-it-all asshole? may be nothing at all like their screen personas. The guy who plays the axe-murderer villain might be vegetarian who sidesteps to avoid crushing an ant; the one who plays the noble hero might be a wife-beater and dope fiend.
There are many actors who won't play weak -- they will play a scene-chewing villain, but they won't play a wimp, on the notion that even if their audience sees them as bad guys and loves to hate them, that's better than being despised because they are cravens.
Being identified with a role can be good and bad; actors are wary of the Superman Curse, and of being pigeon-holed even in a role people love. Shatner is Kirk. Leonard Nimoy is Spock. David Suchet is Poirot. They've all done tons of other stuff, but when they die, those are the roles that will be mentioned first.
Some actors come to terms with this: Better to be beloved for one thing than not at all.
As a writer, you run the risk of being identified with the books you author. Partly this is because a lot of people know the dictum, "Write what you know." Partly it's because of that reader-wonder -- how could s/he write this stuff so well if s/he didn't know about it first-hand?
And partly because it sometimes is true, though writers can fool you. Heinlein wrote Stranger in a Strange Land about the same time he was writing Starship Troopers. If you read only the former, you might think he was a proto-hippie; he wasn't. He was much closer to the latter in his attitude and philosophy, but even that wasn't all he was.
Writers are in the business of making stuff up and offering fantasies. We are professional liars.
Recently I read a book by Earl Emerson, of whose work I am a long-time fan. He has three mystery series, one featuring a Seattle private eye, and two with firemen as the protagonists.
His firemen are much more convincing than his private eye. First, because he's a lieutenant in the Seattle FD; second, because I was a private eye and I sometimes notice when he slips up there.
The book I read was his Thomas Black character, the Washington P.I., and it is laced with conspiracy theory -- from the 9/11 disaster to the secret cabal that really runs the world, and this is all expounded by a character who is a former spook and supposedly has reason to know.
Black's character is caught up in this, and comes to believe stuff he never would have believed before.
(People love conspiracies, and you can almost never go wrong as a writer playing to that, there's a big audience that will follow you down the narrowest rabbit hole without a second thought.)
Does Emerson believe all this? I have no idea, but just because he can write about a character who does doesn't make it so.
Like an actor, a writer takes on roles to make a story work. You must get inside the head of a serial killer, an assassin, an alien and make them convincing. Doesn't mean you are any of those things in real life, but the better writer you are, the more likely it is that people are going to wonder if you mayhaps have more experience in these arenas than you are letting on.
People love the notion that Stephen King looks under his bed at night before he climbs into it.
Some readers can separate the writer from the characters, but many cannot. Something you need to know. I have been told on occasion that I must be 1) black 2) female 3) gay 4) ex-military or 5) politically conservative, because I must be to have written some of the stuff they read.
Bill Gibson told a story once about how he was doing a signing. If you've read his books, you might have an expectation about him that doesn't jibe with his looks. He's tall, skinny, and looks like he might have had a long career in, oh, library science.
So, at the signing, he looks up to see a pair of big Harleys pull into the lot outside the window and a couple of very macho hog dykes climb off the bike and swagger into the book store.
They looked at him. You're William Gibson?
Afraid so.
Hmmp. Well, okay. I guess you can sign our books ...
I can recall meeting but one writer whose work I admired who looked exactly as I thought he would look: Avram Davidson.
So, if you are going to be a writer, it's something about which you should know: If you portray a murderous torturer in a work and the character is really chilling and spooks people? You are going to get some funny looks.
Be prepared.
Posted by Steve Perry at 12:14 PM

I had a buddy, a black guy, who was convinced Spider Robinson was black. No, he's not, I assured him -- he must be, the guy said calmly. No white guy could write about blacks like Spider, and that name! Only a black guy would write under that name!

I finally dug up a copy of Locus and brought it into work, but it took that.

I already get the looks.

People ask what I have written, & I point to "Comfort of Walls", or some Zombie story. After that, it's "Oh", and a loooong, awkward silence. This has happened twice so far.

I don't dare show them "The Ribbon at the Top of the Clock", nor any of the unpublished stuff I have on my computer. No need for the police to be called in...

I have been told on occasion that I must be 1) black 2) female 3) gay 4) ex-military or 5) politically conservative, because I must be to have written some of the stuff they read. "

Funny thing is, with the Interwebs, we get pictures of people readily, and it still doesn't necessarily help. Take for instance my first in-person encounter with one sci-fi author of note, Mr. Steve Perry. I'd seen pictures, even a bit of video, so I knew his face immediately. The first thing that came to mind, though, is, "Wow, he's taller than I expected." I went over, said "hello," and introduced myself. First thing he says to me: "You're taller than I expected." That gave me a chuckle.

One would think by this that the Internet makes you seem shorter than you are in real life.

The second time I encountered Mr. Perry in person, he had in his company one Mr. Dan Moran, another sci-fi author of note, and someone who's picture I was also familiar with. I introduced myself, then smiled and said, "You're shorter than I expected," which he was. Not that he's shorter than average or any such thing, but somehow his tales of playing basketball had me thinking he was taller than me (Steve and I are the same height, it turns out; Dan's a few inches shorter).

It's funny how our expectations get set about people. Sometimes, even when we have evidence that contradicts what we think we know, we're surprised to be confronted with the truth.