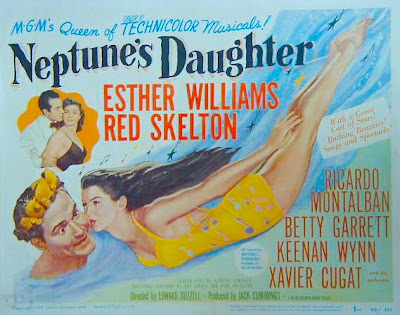 Flipping the channels on the tube last night and came across Neptune's Daughter, one of Esther Williams' pictures from the late 1940's and early 1950's.
A musical released in 1949, this was a combination of screwball comedy and water ballet, and even won an Academy Award™ for Best Song "Baby, It's Cold Outside." The cross-cutting on this song, sung (lip-synched) by four people in two locations, was terrific.
Esther Williams had been a swimming champion in her youth; during what was called back then Billy Rose's Aquacade, where she swam next to Johnny Weissmuller, she was discovered by MGM and cast in several small roles. These led to starring roles in movies called "aquamusicals," wherein a lot of shapely-women in modest bathing suits swam, dived, and did synchronized routines, shoe-horned into a movie that was an excuse to show them.
They were big hits back in the day, and earned Williams the title of "Million Dollar Mermaid," also one of her movie titles.
This outing, one I'd missed, featured Ricardo Montalban as a South American polo player smitten with Williams, whose character worked designing swim suits at a company in SoCal. Thus the reason to have a water revue, to show off the new line.
Some of you will recall Montalban as Mr. Roarke in Fantasy Island from TV, or as Khan, in Star Trek. This was his third movie with Williams, and the pairing worked, making them both stars. He was something of a jock, was Montalban -- if you saw him in The Wrath of Khan, you could see some heavy pec development -- a little droopy, but, yes, those were his -- even in his sixties, and in 1949, when he was not yet thirty, he was much fitter than most leading men of the day.
Keenan Wynn, looking surprisingly dashing as a young man, played Williams' boss at the swimwear factory. Red Skelton was the comedy relief, and if you look closely, you can see Mel Blanc as Pancho, a Mexican violinist. Every time he opens his mouth, you hear Speedy Gonzales, and that's because he was the voice of Gonzales, first as the mouse toon version, then later in Pat Boone's song, "Speedy Gonzales." Good, clean, racist stuff, that, going back to his radio days when he played a Mexican character named "Sy," whose one-word replies to Jack Benny slew audiences.
Mel was a local boy, grew up in Portland, got his start in radio here, then moved to the big time, where he worked for Jack Benny, keeping him in stitches before he became the voices of most of the major Warner Bros. cartoon characters: Bugs, Tweety, Porky, Daffy, Sylvester, Yosemite Sam, Foghorn Leghorn ... the list goes on and on and on. He taught his son the voices, and when he retired, his son took over.
Um. Back to Neptune's Daughter. It was all terribly fluffy and silly, centered around a case of mistaken identity, with Skelton pretending to be Montalban's character to further his pursuit of a girl; a gangster trying to win a bet by keeping the polo player out of a match; a love story, and much goofy stuff in and around a giant swimming pool. Picture Red Skelton in a two-piece swimsuit pretending to be a woman in the water ballet rehearsal to avoid being grabbed by the gangster's goon ...
I thought it was notable, too, for showing people watching a television set. By 1949, there were already two million of the glass-fronted boxes in the U.S., and the big ones like a DuMont (20" being big) cost a thousand bucks for a black-and-white model. And note that in 1949, the average salary in the U.S. was $1300 ...
They don't make movies like that any more. A pity.
Posted by Steve Perry at 11:46 AM

Here's the layout of a script for a TV show that won't play, followed by one that will, courtesy of Harlan Ellison. The long lines represent shot/camera descriptions, the short ones, dialog

Can you see the difference?