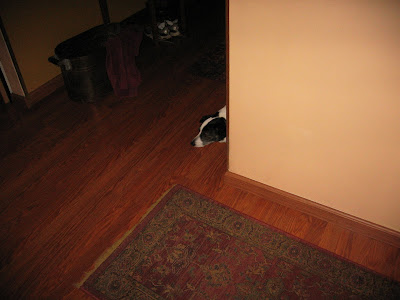 Got an email from a knife guy, centered around a discussion of an article in a book on knife fighting. There was, he said, a section on rites and blood rituals from an old-country art that seemed way past stupid, and that led to my observation on evolution of arts as they move from country to country.
Since it's been a while since I pissed off my fellow martial artists, here's the gist:
This is often a problem when you transfer something -- an art, a belief -- from one culture to another. The Buddhists say it takes three generations -- a hundred years -- for a country to adjust the trappings and make it their own -- India to China to Japan to the U.S., the practices evolve, and while the core is essentially the same, the trappings that were valid in a far away land tend to drop off because they don't address the needs of the new country's practitioners.
A small example from our art: The fighters in the old country tended to go to the body with their first attacks -- either bare or with a blade. They had reasons for this, one of which was that if you hurt yourself in a fight, it might cripple you, in a place where medical treatment was rudimentary. Break your hand hitting somebody on the skull? Could keep you from feeding your family for weeks or months. Less risk smacking somebody in the solar plexus.
So our first practice form -- djuru -- starts with covering the low-line to the body. Makes sense, right?
Americans, however, are headhunters -- they like to punch or stab to the face. (Medical treatment here -- if you can afford it -- is better, so a boxer's fracture isn't as bad a problem as it might be in a place where the sun comes up between you and town, and there ain't no town.)
So my teacher's teacher adjusted the form to deal with that, starting with a high-line cover.
My teacher, realizing that you could get attacked either way, put the two together, covering the high-line and low-line, one, two! in sequence.
But for some folks, the old rituals and moves remain important. (In Java, they use the term pusaka, for "treasure," or "heirloom," and those who adhere to this concept don't change anything. They are attached to the historical and cultural aspects of a fighting art and they hang onto them even though they really don't have as much practical use in the new land. Growing up the American South, I heard this expressed as, "Good enough for grandpappy, good enough for me.")
Some things can be easily transposed: A move you learn with a cane in China can be used in Africa or the Americas -- human physiology is the same everywhere, and bashing somebody with a stick works the same here as yonder. A sword is not a cane, but some of the moves can be adapted, if that's what you have to hand when you need it.
In the U.S., you don't see a lot of men wearing sarongs. In one version of silat taught by people who were born in Indonesia, you still see teachers who say you must wear one to teach classes, as a gesture of respect for the art.
Or there will be a fair amount of time spent teaching techniques that use a sarong as a blocking or trapping weapon. Fun to learn, but not particularly useful per se. You aren't likely to have one if you need it. Might not a jacket be considered instead?
In some silat styles, there are a few words of Bahasa Indonesian or Javanese or Malay still used to describe certain techniques. In our art, we use the terms dalam, and luar, for, respectively, "inside" and "outside." Is sapu dalam better than "inside sweep?" Not really, but it does add some esoteric flavor. A little pepper makes the dish pop. Too much? We have maybe a page of these terms. But most of what we learn is in English, because that's the default language here.
When you are an Indonesian teaching Indonesians, you probably have a different mindset than an Indonesian teaching Americans -- or an American teaching Americans.
I see two ways to go here as a teacher: Make your students adapt to the original culture, or change your instructions to reflect the local culture. Which makes more sense? Depends on who you are and what you believe.
For us, the core of the art is: Does it work? Can you fight with it? Everything else, the history, the culture, the ranks, they all run a distant second. If you can't do the stuff in normal street clothes, it isn't a street fighting art. And the rank certificate makes nice wallpaper, but waving at somebody won't help you in a dust-up. That's what I believe, but, of course, not everybody who gets into an art does so for the same reasons. Different strokes.
One doesn't want to throw out the baby with the bathwater, and if you strip down everything with a foreign origin, you can lose enough of the essence so that it is becomes overly pasteurized and homogenized, and that's not good.
Evolution is tricky. If something works -- if it ain't broke -- nature tends not to fix it.
Figuring out what works and what is broke is always the trick ...
Posted by Steve Perry at 11:47 AM

This leads nicely into 'tradition'....

Went to a seminar, and we had a wee chat about 'tradition'.

The story goes that a young married couple were having roast lamb for tea. The husband noticed the wife cut of the shank end off and threw it away, when asked why, she replied 'tradition, my mum did it'.

So the phoned the mother-in-law.

Turns out she did it because of 'tradition', as her mother did it...

Grandma is still alive, so they phone her at the 'home for the bewildered'. Turns out back in the old days, the ovens were smaller, and a full roast wouldn't fit....

What did this teach me?

Taught me that instructors who say we are doing moves or actions because of 'tradition', have NO idea why they are doing what they are doing, and maybe they aren't as qualified as you would hope.

I started out my martial arts career being VERY traditional. I thought it was the most important thing. I have grown to view this much differently over the years.

My empty hand system is Wing Chun, it was not my first system, but it is the one I stopped at. I have studied it under several teachers, of different 'families' and have ended up with a certain perspective on 'tradition'.

Tradition is a good thing in that it ties us to the past and gives us an anchor for what and who we are. Tradition makes us feel part of something larger than we are, and that is a good thing. It gives roots and meaning.

Tradition is a bad thing when it threatens to make a thing stale or obsolete.

Yip Man is known to have changed the forms and teaching of Wing Chun, often times because students ran into fights that the 'classic' or 'traditional' way lacked a clear response for.

Martial Arts must adapt. I do not think that means they must all become some hodge-podge MMA thing, but they MUST adapt to the methodologies that will be used against them or they become obsolete.

When I was teaching I would explain where each derivation came from, and why I felt it was good or bad. I would then tell the students to not take my opinion for gospel and decide for themselves which way was best.

SO I guess my thinking is that you should teach both and explain that version "A" is the traditional method and version "B" is a more modern approach and why B is different than A. That way you have preserved both the traditional and the living art.

I have trained with all the top branch Serak instructors with the exception of Guru Plinck, but from what I can see on his dvd's and also what others who have trained with him have told me, he is very good at noting points of referance, i.e my teachers teacher did it this way for this reason, my teacher did it this way for that reason and I do it like this for that reason.

Must like Michael noted above,with regards to A and B, I think that stuff is gold dust to a student, because if you know where an arts been, and why it was changed, it helps with your own understading of the art.

>"In one version of silat taught by people who were born in Indonesia, you still see teachers who say you must wear one to teach classes, as a gesture of respect for the art. "<

You're getting VERY good at this, Steve. I can only hope to learn...

Like Michael, I used to be Mr. Ultra-Traditionalist - and it paid off with me looking like a fool when confronted about some of my teacher's more esoteric ways and gross mispronunciations of a foreign language that he passed off as "tradition".

Tradition, to me, is simply another way of saying "habit", and that makes it easier to examine. Am I doing this thing because it's necessary, or because it's part of a ritual? What are the consequences of NOT doing it any longer? Will it adversely affect my training, or simply alter my wardrobe to something a touch less silly?

This kind of thinking isn't for everybody, and I would hazard an assumption that, by and large, the population of the world's hoo-ha'ers don't want to hear it. The trappings of tradition are as often as not what sells the art. But it's kind of like the Matrix: Once you've seen it, you can never accept things simply "as they were".