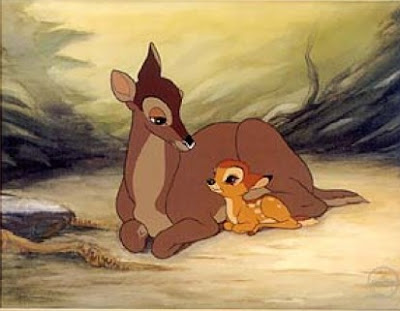 Young Bambi: "What happened, Mother? Why did we all run?"
Bambi's Mother: "Man was in the forest."
Was there ever a more chilling line in any movie? Those of you who think Bambi was a kid's cartoon? Whoo, boy, is that not so ...
Yesterday, in the local paper, there was an opinion piece by a scientist who essentially says that while global warming is real enough, there is absolutely no evidence that humans had anything to do with it. That, essentially, we shouldn't get all het up about it ourselves, and the implication is that we should just merrily go on about our business, since it's not our fault.
La, la, la, not to worry.
I find this statement to be on my personal order of wonder right up there with how somebody can be gay (or lesbian) black -- and a Republican. No matter what you might think, you ain't ever gonna be a real member of their club. They want your vote, but not you.
There's a collection of trash twice the size of Texas floating around in the ocean, The Great Pacific Garbage Patch. Most of it is tiny bits, just below the surface, but still. Since plastic isn't one of Mother Nature's creations, there's no way around the fact that man didn't just go into the forest and kill Bambi's mother, he has also gotten a fairly good start on messing up the seas.
(By "he," I mean, of course, "we.")
I'm not going to go all hippie-green on you, though there are worse ways to look at the world, but it seems to me that people surely do need to start paying attention. I don't think we'll kill the whole planet any time soon, but we can damage it enough so it won't be a place where humans as such can live. And if we do, it won't be anybody's fault but our own.
After we are gone and the roaches prosper, I expect that most of the scars will eventually fade and wind and water and sun will clean things up in, say, thirty or forty million years. Give some surviving species a shot at being top predator, since we obviously didn't have the smarts to keep the job ...
Posted by Steve Perry at 9:06 AM

I hate that term, "Hippie Green". Every time I mention global warming to someone who doesn't want to address it, the first thing they throw out is "Nature-Tree Hugging-Save The Whales-Go Green-Granola Eating-Hippie Mentality", as if it's some knee-jerk response designed to shut me up. All the while, they are complaining about the heat and sitting in my air-conditioned study on the hottest days the Pacific Northwest has ever known.

No one wants to accept mankind's war with it's own planet, but not only does it exist, WE ARE WINNING IT. The current consensus goes something like this: "We'll thank God at least I won't be around to see the planet cook off with no ozone layer left. Hey, let's have a kid!"

I think complacency is the second biggest enemy here.

Mankind being the first.

I used to have stress about this one -- George Carlin fixed it for me.

The planet has been through a lot worse than us. Been through all kinds of things worse than us. Been through earthquakes, volcanoes, plate tectonics, continental drift, solar flares, sun spots, magnetic storms, the magnetic reversal of the poles...hundreds of thousands of years of bombardment by comets and asteroids and meteors, worlwide floods, tidal waves, worldwide fires, erosion, cosmic rays, recurring ice ages...And we think some plastic bags, and some aluminum cans are going to make a difference? The planet...the planet...the planet isn't going anywhere. WE ARE!

We're going away. Pack your shit, folks. We're going away. And we won't leave much of a trace, either. Thank God for that. Maybe a little styrofoam. Maybe. A little styrofoam. The planet'll be here and we'll be long gone. Just another failed mutation. Just another closed-end biological mistake. An evolutionary cul-de-sac. The planet'll shake us off like a bad case of fleas. A surface nuisance.

I think we need to stress out about our actions as individuals. I think every time we get the urge to throw away plastic bottle instead of recycling it, or leave a light on when we leave the room instead of turning it off, we should feel guilty. Maybe that guilt will move us to act more responsibly.

Will these petty misdemeanors against nature drastically affect our ecosystem? No. But I believe we're nickel-and-diming the planet to death. There are 6 billion+ people polluting, sucking up resources, and doing other things to weigh down upon the Earth. There gets to be a point where there isn't enough nature to dilute what we do.

How much can we taint our freshwater supply? How much of our oxygen-giving trees can we cut down? How much heat-absorbing blacktop can we cover the planet's surface with? These aren't little things, and I believe they are having an impact. The question is which one will be the straw that breaks the camel's back.

But yeah, nature itself is screwing us, too (quid pro quo). I think the switching of the poles and its subsequent ice age has the potential to be just as much of an ass-kicker to humanity as toxic waste or gay marriage (joking about that last bit). I just don't know if we'll last long enough to see that happen.

When I think of real man-made global warming, I think of urban heat islands. Everyone knows the city is hotter than the country. Anyone can sit in a car in the city, stick out a thermometer, drive into the country, repeat, see the difference. Weatherman show urban heat islands all the time. And of course there weren't any before humans built cities.
Same with any well-travelled highway.
But when Al Gore says all scientists agree man-made CO2 is a real problem, trust the computer citizen, no disagreement is allowable, any Denier is paid by Big Oil-
Global Warming is a problem. Pious fraud is a bigger problem.
Bruce

You can't travel faster than light either, and it's not a conspiracy by pious frauds.

I dunno. Pious fraud might piss me off. Turning the Earth into Venus is a much bigger problem as I understand it. It was hot here last week, but not enough to vaporize lead.

One can argue some science findings, but beyond a certain point, it gets passing silly.

Al Gore might be over the top, and "all" is always an iffy term that needs to be applied with care, but certainly more agree than don't in this case, and like Dan says, beyond that you are dealing with the tin foil hat guys.

There are people who would have it that the Earth is flat, disease arises from the night aether, and phlogiston is what makes fire burn, but they'll have a really hard time making the case to anybody paying attention.

One shouldn't equate the messenger with the message in this case. Al might ramble on, but he's not the problem here.

You do see that, don't you?

'How much heat-absorbing blacktop can we cover the Earth's surface with' is a real problem. City heat islands are a real problem. That's as proven as evolution; you can prove it with a thermometer. It would be a local problem if there weren't cities all over the globe.

When Al Gore says Co2 emissions are unquestionably proven to be a problem in the same class he lies. Al Gore's lies control a lot of science budgets, and influence the messages they put out.

Pious fraud works great for orthodoxy-sniffing. Sniff, sniff, are you a GOOD pro-environment person? If you were a GOOD person you would WANT to believe Al Gore's Co2 lies. Putting a guy who's making money off lies about a problem may not fix the problem, but it shows how much you really care.

On a personal note, I paid full price for Gore's book 'Earth in the Balance'. Reviewers said it was a good book. It was boring, dishonest, badly written, made a lot of money, and really annoyed me.

Have global temperatures gone up?

Has man effected this?

Is man the sole or even most powerful?

Don't know. Don't like the idea for a good trial on that, either.

Bottom line? To me it's simple. We know something is happening. We don't know all the causes, and we probably can't control all of 'em. But that doesn't mean we can't make reasonable efforts to control what we can.

If I'm in a car with no brakes going downhill fast -- and getting faster -- I'm going to be looking for the best choice of things to hit, or for a runaway ramp or anything else I can do to control the situation.

The same idea applies to the environment. I'm not convinced that man is the devil incarnate, destroying the environment. But I think it's pretty damn clear we're leaving a mark -- and it's incumbent on us to try to make sure the mark is as small as possible.

Every time I hear some right-wing Republican gas-bag talk about how Global Warming isn't happening or how carbon build-up in the atmosphere isn't real, I think "why, they must have access to information that has somehow escaped the notice of the world's premier climatologists!". And then I listen with rapt attention for this information to spill forth from their lips. Sadly, I am still waiting.

What's the difference between the Hindenburg and Rush Limbaugh?

One is bloated flaming Nazi gasbag.

The other was a balloon.

While I certainly think that controlling and limiting and reducing environmental pollution is a fine thing to me it's not really the same issue as Global Warming\Climate Change. Far as I can tell climate change is a natural and continual and progressive thing. It has happened before and will definitely happen in the future, even if we all died tomorrow (and thus stopped spewing CO2 and all the rest of it).

I think the important thing is learning to adapt to that, climate change, 'cause it's'a gonna happen anyway.

Be that another ice age, a greenhouse planet, pole switches, super volcanoes, it's coming and it's going to suck.

Well, the option would be to force businesses to alter their conduct, and plainly risking positive feedback effects that might turn the Earth into another Venus is something conservatives are willing to risk, rather than take that dreadful step .....

The problem (okay, ONE of the problems) is that "change" is the second-to-last thing most people are willing to consider. Corporations, governments (they are still two different things, right?) and other policy-making bodies are still made up of people...so they, individually and collectively, are extremely resistant to change...

Unless you can clearly show them the profit, or power to be gained by the change!

One of the problems (see? I knew there was more than one problem!) is that scientists, academics and activists have been yelling at the corporations and governments in the "wrong language." They have been trying to shame those political bodies into action...forgetting that, by definition, political bodies HAVE no shame! If you want to appeal to business (including government) you have to unequivocally demonstrate how your proposal will benefit the "bottom line"... and improving the world, heck, not DESTROYING the world for future generations does NOT interpret as benefiting the bottom line.

As an individual, perhaps the best we can do is recognize the "nickel and dime" choices we can make, practice those choices and model the behavior/change we want to see.