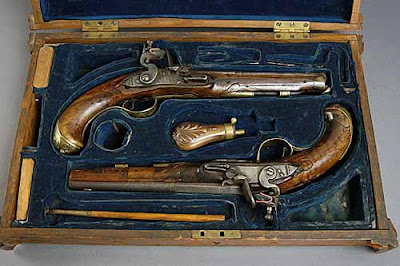 After the recent atrocity at Virginia Tech -- and in case you have been living in a cave on Mars of late, this was where a madman ran amok, shooting and killing fellow students and professors -- I got into an online discussion about the incident.

I've had variations of this discussion before, and it usually sorts out into something like this: On the far left side of the debate, people are appalled, and blame the problem entirely on guns. They want to make all guns illegal, possession of ammuntion worth ten years in the federal pen, and they say that will solve the problem -- without guns, nobody will kill anybody else, or at least it will be much harder to do so.

On the far right, people are appalled, and think that everybody should be armed, all the time, and that when some loon steps up and commences to commit assassination, he should be filled with enough lead to sink the Bismark, and, by the way keep your commie pansy liberal hands off the Second Amendment.

Like most people I know, I fall somewhere in between. As a hillbilly/Oakie/coonass redneck, I grew up as a shooter. Both my parents could outshoot me with a rifle until I was eighteen. They came from an age when a lot of folks still put much of their food on the table by hunting.

My own perspective as a martial artist shades toward the be-prepared side of the argument. (And it quickly stops being a "debate," with name-calling and much frothing after the first couple of exchanges. Gun-control is like abortion, politics, and beer -- reason goes out the window with the first sally.)

I'm am of the mind that there are wolves, sheep, and German Shepherd Dogs, and that the protectors of the sheep ought to have sharp teeth. This doesn't just mean police officers, because we all have our own little flocks and some of us don't believe the police will always arrive just in the nick of time.

No, I don't think Americans should be allowed to carry bazookas, hand grenades, or pocket nukes. Yes, I do think that people who are willing to be trained, fingerprinted, photographed, checked out by the FBI, and who aren't 1) felons or 2) children or 3) crazy should be allowed to own and possess firearms, and that includes handguns.

Would it have made a difference if there had been students or professors in that gun-free zone who'd been armed with a sidearm when Cho started shooting? I don't know. But the first rule of a gunfight is: Bring a gun. Otherwise, it isn't a fight, it's a one-sided slaughter.

One of the least compelling arguments to me is the issue of control. It goes like this: You can't control everything in your environment, that's an illusion. What if the Chinese Army comes thundering over the ridge? Your handgun won't do you much good, will it?

My answer to this is, Yep, you are right. You can't be prepared for everything. You could get hit in the head by a meteor, blap, you are dead. But -- because you can't control everything, does that mean you shouldn't try to control anything?

I have insurance on my house, car, life, and health, with the hope I won't have to use any of them, but just in case. Mugger insurance makes perfect sense to me -- getting your head staved in or your throat cut just the one time is apt to ruin your whole day.

I mean, as a martial artist, I obviously have control issues. With my Virgo nature, I like to put my ducks in a row. I sometimes find myself straightening magazines on the rack at the bookstore. But I have a principle I use here: It is generally better to have more options than fewer. If I have a hawg-leg strapped and I don't need to pull it, then no harm, no foul. The non-violence of the strong is better than the non-violence of the weak, because I have a choice, to fight back or not.

So, I'm curious about this. Yes, we need better ways of keeping lethal hardware out of the hands of children, the demented, violent criminals, and lying Presidents, if that's not multiply redundant, and I'd be interested in hearing reasonable -- that's reasonable -- suggestions to this end.

But until the Messiah comes, how do you line up on this one?

"without guns, nobody will kill anybody else, or at least it will be much harder to do so."

This is no argument, it's a raging fantasy led by Michael Moore. Since I have already put it on the table on my own blog, let me say that I have two deaths to my name, and I didn't use a gun. And physically, it's not hard to accomplish. We are fragile creatures. Also, I STILL suck at marksmanship, if I had to admit it, it's my worst art today.

"a hillbilly/Oakie/coonass redneck, I grew up as a shooter. Both my parents could outshoot me with a rifle until I was eighteen. They came from an age when a lot of folks still put much of their food on the table by hunting."

In S.C. it's the same, and THIS is what I think is missing, in a nutshell: An upbringing about weapons & what they are capable of. Europe is like this with the Nazi beer you give me a hard time about, children are raised with it so the taboo and mystique surrounding it are gone. Not that they don't have thier fair share of alcohol related problems, but they have educated kids when the choice comes around.

I think the same should be done by us, the "gun culture" of the world. In the days of yore in America, a boy would learn about certian things in school, and certian things from his Dad. That doesn't happen anymore. It may sound radical, but...What if there was a shooting program? Maybe not guns, but say archery, like they used to have in high schools in the 50's and 60's. Maybe pellet guns, I don't know, SOMETHING that would stave off a person handeling a gun for the first time in his life when he/she is at thier most confused and angry point in life (teens/early 20's).

I don't want to say it's "bad parenting", in this case it's not, I think that awareness in stead of paranoia would be the better answer here.

I have to admit, I prefer to have the options myself. I would rather have my sidearm and not need it.

I do like the idea of a more fully fleshed legal "firearm license" that took care of the background check and included some required testing/training and demonstration of skills. Possibly with ratings for different categories of firearms and such. Much like the drivers license system, but with tests that actually test required skills and safety knowledge. :)

It is mostly the strict registration of firearms that makes me a little nervous. I don't completely disapprove in theory, but in practice we have seen firearms registries used to take away the weapons of law abiding citizens before.

Also pro gun choice here. Eduage, and learned to respect guns at an even earlier one. Today, I don't carry one, but if I felt the need to, I think I should have the right to. Have me go through a safety course, check my background and make me wait seven days, it's all good. But, let me carry if I choose. cation is one of the keys here. I learned to shoot at an early

When it comes to insuring only rational and at least moderately capable people have weapons, government doesn't seem to be of much use, either for licensing or training. Bureaucracies are very good at appearing to address problems while in reality doing nothing (or the absolutely wrong and ineffective thing), and I would think the last couple of decades would have provided ample of examples of this. So in my view, a Virginia Tech now and then is just the price you pay for the right to own weapons. The alternative seems to be worse, as entirely eliminating the civilian ownership of weapons would require Draconian measures that I imagine would lead to far worse situations than an occasional loony on the rampage. Freedom is not a safe condition, although there are plenty of people who will be happy to take your freedom in exchange for a false promise of "safety". I grew up in a society of gun owners; all the boys at my grade school carried pocket knives, too; an act that will at the very least get you expelled today. I was in a combat arm of the military for a number of years and spent a fair part of my life carrying weapons every day. My choice is to do everything I can to avoid situations where I might need a weapon (and I admit this is fairly easy for me, living as I do in the sparsely-populated boonies), but retain the option to own and carry weapons if I think it's necessary. Yep, I guess that makes me an anarchist, but at least a fairly rational one, I hope.